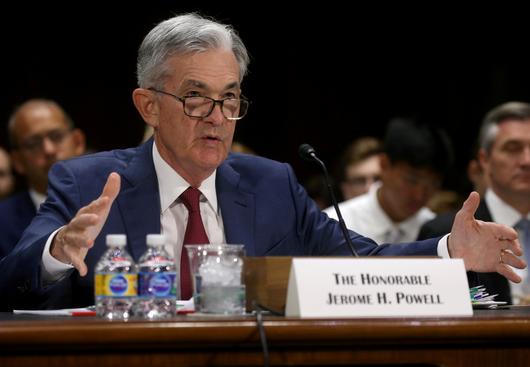 WASHINGTON (Reuters) – Federal Reserve Chair Jerome Powell has taken a glass-half-full view of the U.S. economy but the trouble may be that the glass has gotten smaller and has a few cracks.

Over the next week it risks losing a few drops as deadlines approach for the United States to impose new tariffs on China, British voters decide what has been called a “nightmare” election between far-left and far-right candidates, and other central banks take stock of what seems an increasingly turgid global economy.

Powell offered the upbeat assessment two weeks ago at a speech in Rhode Island. James McCann, senior global economist with Aberdeen Standard Investments, said the metaphor is apt, given the resilience of the U.S. labor market, but only to a point.

“Our broad view is that the global economy has a lower speed limit that is setting in,” and which may constrain the United States even if the trade war eases, he said.

“Even in emerging markets the speed limit is slowing,” with China and other large developing countries no longer the dependable props for global demand they were at the end of the 2007 to 2009 economic crisis.

The Federal Reserve meets this week and is likely to leave interest rates unchanged after cutting them three times this year. Policymakers on Wednesday will also provide updated projections for the U.S. economy and interest rates, their clearest statement yet of whether they think the rate cuts approved so far are enough to keep the economy rolling for another year.

In their last set of projections in September, policymakers at the median saw the U.S. economy growing 2% next year, roughly at trend, and officials have noted that markets that are sensitive to interest rates, such as housing and autos, have strengthened.

In October, at his last press conference, Powell spoke of “the makings of a possible settlement” in the United State’s trade dispute with China. Other sources of trouble, such as the possibility of a disruptive “hard” departure of Britain from the European Union, also seemed less threatening.

Economic analysts looking ahead to next year also have been generally optimistic that 2019 will be seen as the year when growth and trade risks became their most acute, with the likelihood of a U.S. recession now easing.

But the global economy is slowing. The International Monetary Fund at its semi-annual meeting in October cut its world growth forecasts for this year and next and said the outlook remained “precarious.”

And there’s still no deal between the United States and China. While U.S. import levies due to take effect on Dec. 15 now appear likely to be postponed, they are not expected to be canceled outright – pushing that set of risks off into 2020. The next round of tariffs is to include many consumer products that have been excluded from the import tax so far to try to limit price rises at the shopping mall.

On the upside, however, it appears a long-elusive deal to overhaul the NAFTA trade pact is now in reach, with an agreement struck Tuesday and lawmakers in the United States, Mexico and Canada all poised to ratify.

Yet, as with the up-and-down negotiations over Brexit – still unresolved and with the country’s political leadership now up for grabs – the weeks since Powell’s last press conference have shown how shaky any forecast may be that depends on elected officials to lower “political risk.”

Uncertainty over trade policy was a key reason the Fed cut rates this year, worried that businesses were scaling back investment plans to such a degree it could slow the economy overall unless the central bank took steps to counter it.

Since then, negotiations have dragged on, and in addition Trump announced plans for new tariffs on metals from Argentina and Brazil, and threatened them on an array of French products.

In Japan, the outlook has taken such a turn that the government rolled out a $120 billion fiscal stimulus program, justified by both the short-term damage from the trade war and a generically weak outlook for 2020.

Perhaps the biggest risk is that China’s economy will slow regardless of what happens in the trade spat with the United States, as Chinese officials try to slash the country’s debts to more sustainable levels and spending falls as a result.

Other central banks have been acting to try to counter concerns of a sort of creeping stagnation.

But BNP Paribas Chief Economist Daniel Ahn says it is a short step from a worse-than-expected trade outcome or a bit of bad economic data to the sort of stock market volatility that ends up hurting the broader economy when household wealth takes a hit.

Ahn said he is already expecting monthly U.S. job growth to slow next year and dip below 100,000, a level Fed officials often cite as the breakeven between a labor market absorbing new job market entrants and one that is effectively sidelining people who want to work.

That could also hurt consumption, the economy’s key prop at this point, and keep U.S. growth stuck at around 1% through early next year, Ahn said. It would be the sort of “material change” in the economic outlook that Powell has said might prompt more rate cuts. BNP is expecting two cuts early next year.

“Sentiment may have gotten a little bit ahead of itself,” Ahn said of the broad consensus that the United States and China were poised for a trade breakthrough, a conclusion partly based on the notion that President Donald Trump will want the issue resolved at some point during an election year. “We think markets should be not quite as sanguine.”