Poverty in Italy stops growing for first time since 2015 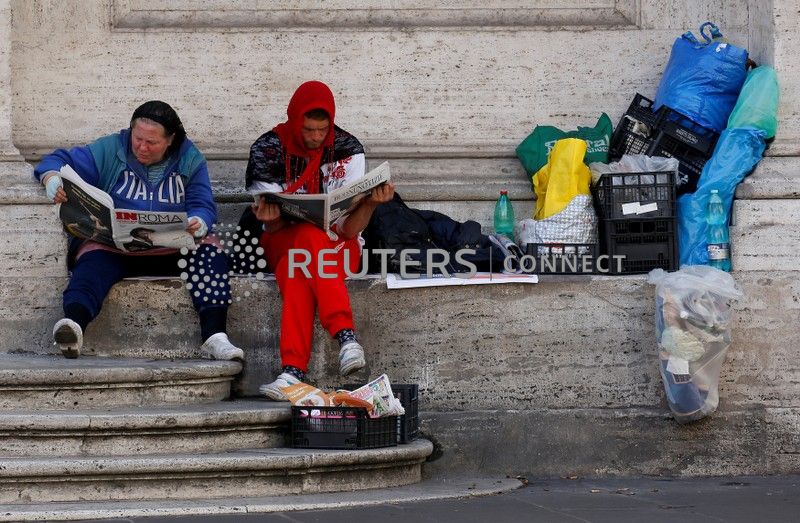 Homeless man and woman read newspapers as they sit in front of church in downtown Rome, Italy September 15, 2018. REUTERS/Alessandro Bianchi

ROME (Reuters) – The number of Italians living in absolute poverty held steady in 2018 after three straight years of growth, though the problem remains at a record high, data showed on Tuesday.

About 5 million people or 8.4% of the population live in absolute poverty, defined as those unable to buy goods and services “essential to avoid grave forms of social exclusion”, according to data from national statistics bureau ISTAT.

In terms of families, the number was 1.8 million, the highest since ISTAT records began in 2005.

Fighting poverty is a key goal of the year-old populist government, which has embarked on a big expansion of state welfare, including a “citizens’ income” for the poor, and plans tax cuts to reinvigorate the chronically stagnant economy.

Luigi Di Maio, who heads the coalition 5-Star Movement and championed the welfare reform, said in September that the government would “abolish poverty” in the euro zone’s third largest economy.

In Italy’s underdeveloped south, the bedrock of support for 5-Star, more than 11% of people were living in absolute poverty last year, ISTAT said.

Italians living in “relative poverty” — those whose disposable income is less than around half the national average — fell to around 15% of the population from 15.6% in 2017.