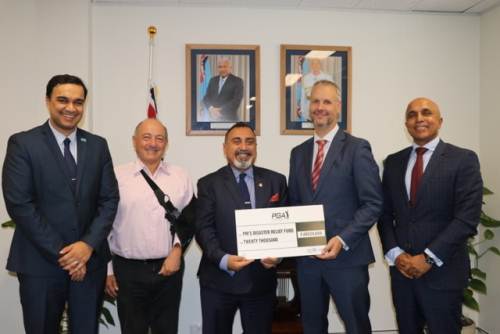 The PGA of Australia and Sports and Entertainment Limited (SEL), the joint owners of the tournament, announced the donation would go towards the Cyclone Assistance Relief Effort for Fiji (the CARE for Fiji effort) that was launched by Prime Minister Voreqe Bainimarama.

“We are saddened to hear about the effects of the cyclone on this beautiful country, and hope this donation will help the Fijian people devastated by Tropical Cyclones Josie and Keni get back on their feet,” Mr Hergt said.

The PGA of Australia and SEL applauds the Government’s CARE for Fiji effort and wishes the Pacific Island country a swift recovery.

Fiji has been the home of the Fiji International presented by Fiji Airways for the last five years. Played at Natadola Bay Championship Golf Course, the tournament is tri-sanctioned by the ISPS HANDA PGA Tour of Australasia, Asian Tou, and the European Tour.