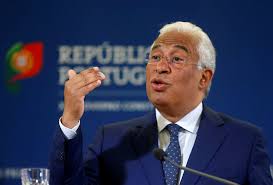 LISBON (Reuters) – Portugal’s main conservative opposition parties would approve retroactive pay rises for teachers only if public finances can sustain them, they said on Sunday, reducing the chances of the Socialist government resigning over the issue.

Prime Minister Antonio Costa had threatened to resign if such increases are approved in a full parliamentary vote likely to take place on May 15 after the conservatives joined forces with the far left in a parliamentary committee last week to approve retroactive pay rises for teachers over nine years.

There have been waves of strikes and protests from teachers, nurses, police and prison guards in the past few months to press demands for pay increases and better working conditions.

However, Costa’s threat looked unlikely on Sunday as the two conservative parties, the center-right Social Democrats (PSD) and rightist CDS, said they would only support the payments in a full parliamentary vote if they do not threaten state finances.

The Social Democrats (PSD) and right-leaning CDS were obliged to back down, a government spokesman said.

“The government has imposed financial responsibility and protected the credibility of the country abroad,” he added.

In a televised statement Social Democrat leader Rui Rio accused the government of creating an “artificial crisis” out of the issue but added that his party would support pay increases only if public finances are safeguarded.

“For the PSD, and particularly for me personally, balance of public finances is a non-negotiable condition,” Rui said.

CDS leader Assuncao Cristas earlier said it was a government “lie” that her party had voted with the left to make multi-million payments to teachers.

Support for the payments would only be made if there is “economic growth and a guarantee of the sustainability of state finances”, she said.

“Either parliament accepts our conditions or we won’t approve any payment,” Cristas added.

Public sector wages were frozen during Portugal’s 2011-14 debt crisis and the government is concerned that big increases for one sector would prompt a flood of demands by all civil servants.

The Socialists have won praise from investors for reducing the budget deficit to nearly zero.

The dispute may have played into Costa’s hands by allowing him to portray the Socialists as the only party defending fiscal responsibility ahead of a general election in October.

“What is at stake is all the efforts that have been made to balance the budget and that have cost all Portuguese taxpayers so much,” said political scientist Marina Costa Lobo.

The Socialists have now unfrozen civil servants’ pay but want to reinstate wages gradually to ensure efforts to maintain healthy public accounts are not in vain. Portugal’s debt remains among the highest in the euro zone.