Portugal marks 45 years of democracy but fight carries on 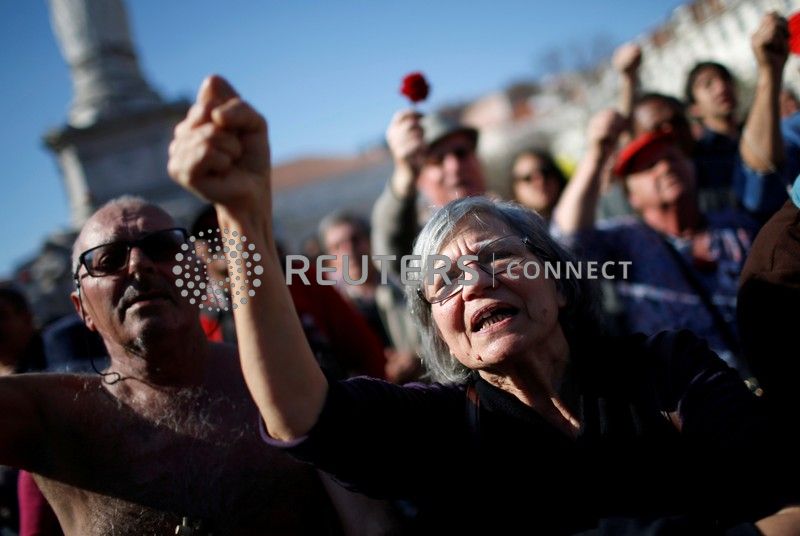 LISBON (Reuters) – Thousands marched in Portugal on Thursday to celebrate the almost bloodless revolution 45 years ago that ended its four-decade-long dictatorship, while politicians said that economic and social developments had not matched its democratic advance.

Dictator Antonio Oliveira Salazar ruled Portugal from 1932 to 1968, though his regime only crumbled on April 25 1974, in the ‘Carnation’ revolution that led Portugal to democracy.

In Lisbon on Thursday, protesters young and old marched through the streets shouting “Fascism, never again!”. Demonstrators also took over the main streets of Portugal’s second-biggest city Porto, to hail the country’s liberation but also to demand more rights.

Portugal will hold a general election in October.

Holding a red carnation, the symbol of the revolution, Portugal’s president Marcelo Rebelo de Sousa told a room in parliament packed with politicians and guests that more must be done to tackle the country’s most pressing challenges.

“We want more, much more from our social, political and economic democracy,” said Rebelo de Sousa. “Persisting inequalities continue to undermine cohesion between people, between groups and territories.”

“We live in a country with such low wages and pensions,” she said. “People do not know if they can make it to the end of the month.” Portugal’s minimum wage is fixed at 600 euros a month, compared with 1,050 euros in Spain.

Opposition leader Rui Rio also argued the country is in need of reform, especially around its electoral, political and justice system. “After (this year’s election) political parties must consider a reform of the democratic regime in order for it to remain democratic,” he said.

Costa’s Socialists are expected to win October’s election, but may struggle to secure an outright majority.