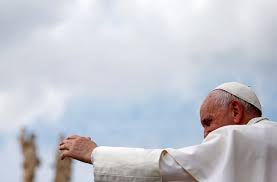 FILE PHOTO: Pope Francis greets faithful at the end of the weekly general audience at the Vatican, May 1, 2019./File Photo

“If Pope Francis cannot make zero tolerance (of abuse) happen in Argentina, he’s not going to be able to make it happen anywhere else,” said Peter Isely, a founding member of Ending Clergy Abuse, at a news conference in Buenos Aires.

Representatives of website BishopAccountability.org and individuals who have sued the church in Argentina alleging sexual abuse were also present.

Pope Francis, the first Latin American pontiff, is a former archbishop of Buenos Aires but he has not visited his home country since he became pope in 2013.

In neighboring Chile, the Catholic Church was engulfed by scandal after a visit by the pope last year that brought to the surface a string of abuse allegations now being investigated by criminal prosecutors.

The Vatican is meanwhile working on a papal document that would establish procedures for Catholics to report bishops suspected of sexual abuse or negligence in sexual abuse cases.