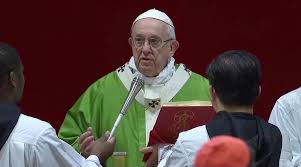 Pope Francis is seen during the last day of the four-day meeting on the global sexual abuse crisis, at the Vatican, February 24, 2019, in this screen grab taken from video. CTV via REUTERS

VATICAN CITY (Reuters) – Pope Francis ended his conference on the sexual abuse of children by clergy on Sunday by calling for an “all-out battle” against a crime that should be “erased from the face of the earth”. But victims and their advocates expressed deep disappointment, saying Francis had merely repeated old promises and offered […]