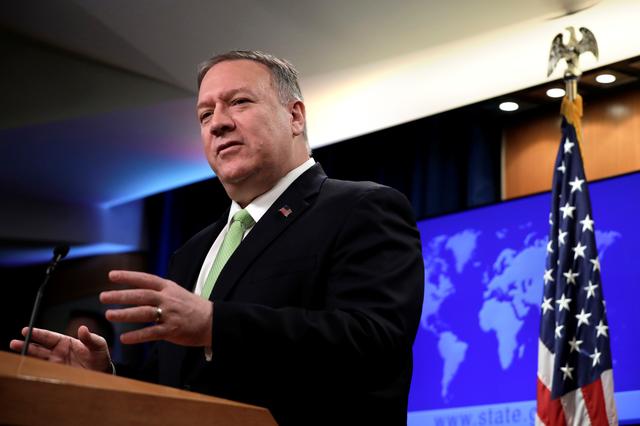 U.S. Secretary of State Mike Pompeo makes a statement to the press at the State Department in Washington, U.S., December 11, 2019. REUTERS/Yuri Gripas

Trump on Tuesday met with Lavrov at the White House, a visit that revived questions about whether Russia interfered in the 2016 election that brought Trump to power and whether it might do so again in 2020.

The White House said after the meeting that Trump warned Russia not to interfere in the 2020 elections, a statement that showed the president taking a tougher position on the issue than in the past. In 2018, flanked by Vladimir Putin, Trump said he believed the Russian leader’s claim that Moscow did not meddle in the 2016 vote, which put the president at odds with his own U.S. intelligence agencies.

But Lavrov, when told about the White House statement, speaking through an interpreter at an evening news conference, said: “You know, we haven’t even actually discussed elections.”

Pompeo disputed Lavrov’s account on Wednesday and said such a warning was delivered in every meeting he has been in on Tuesday and that he has attended three.

“I can tell you that Foreign Minister Lavrov’s statement is not accurately a reflection of my recollection of that meeting. And there is no mistake that President Trump made clear in the meeting that he had with Lavrov … that President Trump personally, and America, finds their meddling in our elections unacceptable,” Pompeo said.

Lavrov on Tuesday vehemently denied the American accusation that Moscow tried to sway the 2016 election and offered to publish a cache of communications between Washington and Moscow from that year which he said cleared Russia of the U.S. allegations.

Lavrov’s last Oval Office meeting in May 2017 turned into a public relations disaster for Trump, who was accused by unnamed U.S. officials of divulging highly classified information during that meeting about a planned operation by the Islamic State militant group. The allegations were denied by the White House.

Trump was also blasted for media reports that he told Russian officials that firing FBI Director James Comey had relieved him of “great pressure.” Comey’s dismissal ultimately led to a 22-month investigation by then-Special Counsel Robert Mueller into Russia’s role in the 2016 U.S. presidential election.

The inquiry laid bare what Mueller and U.S. intelligence agencies have described as a Russian campaign of hacking and propaganda to sow discord in the United States, denigrate 2016 Democratic candidate Hillary Clinton and boost Trump.