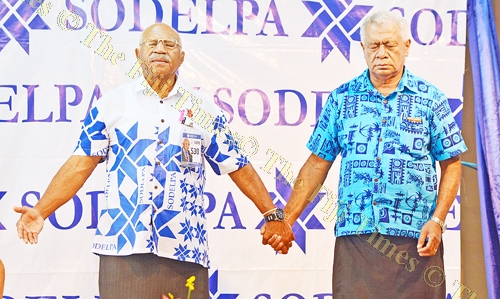 THE latest result of a Tebbutt-Times poll revealing that Prime Minister and FijiFirst party leader Voreqe Bainimarama as the preferred choice for PM is “not surprising”, says SODELPA leader Sitiveni Rabuka.

He said for the past 12 years, Mr Bainimarama was in power and had carried out developments which impacted the lives of the people.

“Bainimarama has showed the people what he will do and he has shown what can be done, while we just came into the political arena a few years ago. This applies to Professor (Biman) Prasad too. The NFP leader who has been around too for some time fighting for people’s issues, so it’s not surprising to see people choosing Mr Bainimarama as PM,” Mr Rabuka said.

According to the Tebbutt-Times poll, Fijians rated Mr Bainimarama as the preferred prime minister in the latest research which was conducted from October 22-24.

At least 68 per cent of those polled said if an election was held in Fiji tomorrow, they would choose Mr Bainimarama as their PM.

Mr Rabuka received 24 per cent support in the poll. Fiji goes to the polls on November 14.