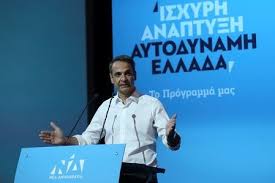 ATHNES (Reuters) – Greece’s conservative New Democracy party has a 9 percentage-point lead over the ruling leftist Syriza party ahead of a snap election on July 7, according to a poll published on Saturday.

Kyriakos Mitsotakis’s New Democracy was on course to win 38.5% of the vote, while Syriza would get 29.5%, the poll by Metron Analysis for weekly To Vima newspaper showed.

Mitsotakis, a 51-year-old scion of a power family of politicians, won a 10 point victory over Syriza in the European Parliament vote last month, prompting Prime Minister Alexis Tsipras to call the early vote.

Tsipras’ four-year term was due to end in September.

Movement for Change, a political alliance formed by socialist PASOK party and the former Prime Minister George Papandreou’s Movement of Democratic Socialists would rank third, getting 8% of the vote, according to the poll conducted June 14-19.