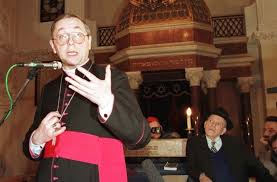 WARSAW (Reuters) – A Polish archbishop has invited victims of sexual abuse by pedophile priests to meet him, and said all Catholics had a duty to report and prevent such crimes.

Archbishop Stanislaw Gadecki said on Wednesday that 28 people who suffered abuse as children had accepted his invitation, some of whom he had already spoken to.

The scandal in Poland follows investigations into widespread abuse of minors by clergy in other countries – notably in Chile, the United States, Australia and Ireland – that have shaken the Roman Catholic Church to its foundations.

Pope Francis is due to receive a report this month that will accuse some bishops in devoutly Catholic Poland of failing to report pedophilia cases, which activist and opposition lawmaker Joanna Scheuring-Wielgus said in January should cost them their jobs.

Gadecki said the victims’ pain and suffering “require everyone – from bishops and religious superiors, from clergy and laity – to be unconditionally involved in the process of reporting, hearing, repairing and preventing such crimes.”

Poland is one of Europe’s most religious countries, where nearly 85 percent of the 38 million population are Catholic and an estimated 12 million attend Sunday mass.

But Church authorities there have yet to reach a consensus on how to address the issue of abuse.

An arm of the Church has filed a suit in the Supreme Court seeking to annul a 1 million zloty ($265,0000) payment ordered by a lower court to a woman who, as a 13-year old child, was repeatedly raped by her local priest.

The case was a landmark ruling in granting compensation and an annuity to a victim of sexual abuse by a Catholic priest in Poland.