Polish ambassador spat at in Israel amid rising tensions 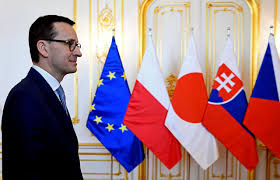 WARSAW (Reuters) – Poland’s ambassador to Israel was spat at while sitting in his car in Tel Aviv, Israeli police said, drawing condemnation from the Polish government at a time of rising tensions between the two countries. An Israeli police spokesman said on Wednesday a 65-year-old Israeli architect was arrested over Tuesday’s spitting incident. At […]