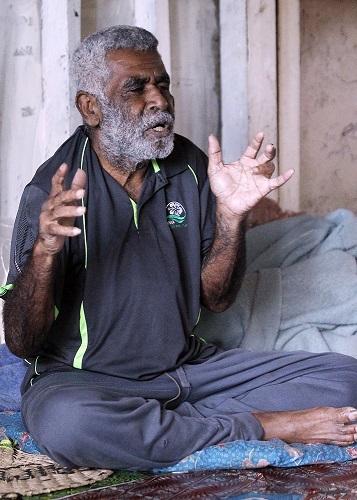 Head of the mataqali Valebure of Colo-i-Suva Village talks to The Fiji Times on Saturday, May 04, 2019. Picture: ATU RASEA

TWELVE men were taken in for questioning by police yesterday for allegedly threatening to close down water supply at Savura Dam in Wailoku, Suva.

“Considering the situation where they had allegedly threatened to cut off water supply, a basic necessity to hundreds and thousands of people, the group have been taken in for questioning,” he said.

As a result of the incident, ACP Maretino Qiolevu urged the public to follow proper legal channels and processes if they had grievances they wanted to be addressed.

Head of the mataqali Valebure Taitusi Rokocua said he had given the approval for the group to close down the dam located on a 160-acre land that belonged to the landowning unit.

Mr Rokocua said the group had allegedly entered the dam area about 9am and were taken by police two hours later.

He claimed they wanted to bring attention to the fact that they had not been compensated for the use of the land, which had mineral and indigenous trees.

Mr Rokocua said their forefathers had been fighting for compensation since the 1960s “and now the third generation is still waiting for that money”.

(* Note to our readers: This is the version of the article that was published in today’s edition of The Sunday Times. Police have now confirmed that 11 men are still being questioned at the CID headquarters; one has been released because he is a juvenile.)