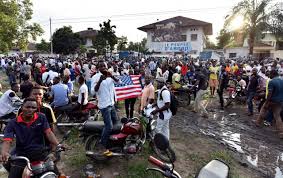 KINSHASA (Reuters) – Democratic Republic of Congo’s election commission promised to release results of a presidential vote late on Wednesday, while residents said they feared violence would mar the first electoral transfer of power in 59 years of independence.

Riot police were deployed at the commission’s headquarters in Kinshasa and elsewhere in the capital before the announcement of the outcome of the Dec. 30 vote.

Any widespread perception the election has been stolen could set off a destabilizing cycle of unrest, repeating violence that followed elections in 2006 and 2011.

Whoever wins would be the first leader to take power at the ballot box since Prime Minister Patrice Lumumba, who was toppled in a coup less than three months after independence in 1960 and killed four months later. Kabila has ruled since the 2001 assassination of his father Laurent Kabila, who overthrew long-serving dictator Mobutu Sese Seko in a 1996-1997 civil war.

The election commission (CENI) said it would start to issue the results around 11 p.m. (2200 GMT) on Wednesday.

“We don’t want people to die when they announce (the results), blood to be spilled,” said Kinshasa resident Ohn Kabamba. “We are fed up, we are tired and we are waiting for a peaceful announcement which will allow us to rejoice rather than cry.”

“If the CENI announces the true results of the ballot boxes it will be calm but if not, I don’t know what will happen,” said another Kinshasa resident, Abraham Tumba.

Kabila had wanted to hand over to Shadary when he stands down this month two years after the official end of his mandate. But polls suggested the former interior minister was trailing both Tshisekedi and frontrunner Fayulu.

The Roman Catholic Church, which helped monitor the poll, has said there was a clear winner in the vote but refrained from saying who it thought had won. It has been working behind the scenes in the strongly Catholic central African country to secure a peaceful transfer of power.

In a joint declaration with a group of Protestant churches and election observer mission SYMOCEL, the Catholic bishops conference called for calm and demanded that CENI publish “only results that come from the ballot box”.

“It is on that condition that the Congolese people, who are already in possession of vote tallies posted in front of polling stations, will trust CENI and accept the results,” it said.

Besides the election commission’s headquarters, police also took up positions along Kinshasa’s main boulevard. Although Kinshasa residents went about their normal activities, some parents kept their children home from school as a precaution.

“Everyone … voted against the government in place. We are preparing fully to demand victory if it is stolen from us,” said Augustin Bujiriri, 25, a student in the eastern city of Goma.

The results were originally due last Sunday but were postponed due to delays tallying the vote.

Tshisekedi’s camp, which says it expects to win, said on Tuesday that it had met with Kabila’s representatives to ensure a peaceful transfer of power, although Kabila’s camp denied any such meetings had occurred.

Supporters of Fayulu have voiced suspicions that Kabila may be looking to negotiate a power-sharing agreement with Tshisekedi if his candidate Shadary loses.

On Tuesday, Fayulu and six other presidential candidates issued a statement saying that the results “cannot be negotiated”.

Tshisekedi’s spokesman, Vidiye Tshimanga, on Wednesday sought to play down the contacts with Kabila’s representatives, saying they had occurred only on the sidelines of meetings with the CENI and regional observers about the electoral process.