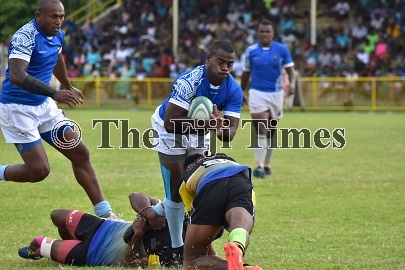 It was history in the making at the tournament as two Police teams featured in the final for the first time. Police Blue had the services of Filipe Suguturaga, Terio Tamani, Samisoni Viriviri and Kitione Taliga while Police White included Sekeo Railoa and Peceli Nacebe.

Police Blue captain Keponi Paul said the victory had set the platform for their Marist 7s defence next month.

He said the result was achieved through hard work both on and off the field.

“It is history in the making because I have never heard of two Police teams playing each other in the Nawaka 7s final,” Paul said.

“We will enjoy this victory and focus on the next task which is the Marist 7s.

“This is the result of all the hard work especially the bonding sessions for the past two weeks. “We are the defending champions of the Marist 7s so it will be back to hard work.

“We need to improve our discipline because we got a few cards in the quarter-final and the semi-final.

“This victory is dedicated to all my fellow workers who are at the stations today and the whole police family.”