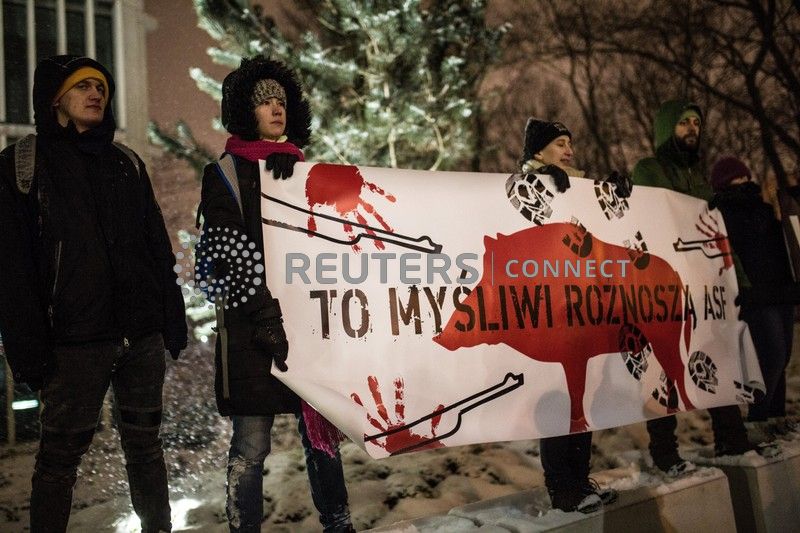 WARSAW (Reuters) – Hunters and activists have united against the Polish government’s decision to cull most of Poland’s wild boar population in an effort to curtail health risks related to African swine fever (ASF).

“There is no scientific basis for this, it is barbarism,” said Katarzyna Karpa-Swiderek, a spokeswoman for animal rights organisation World Wildlife Fund (WWF) Poland.

“We broadly do not protest against hunting wild boars, but in our opinion the scope of the proposed cull is excessive.”

Estimates of Poland’s wild boar population vary widely and range from at least 200,000 to one million.

In December, the government called on all licensed hunters to kill most of the wild boar population in order to prevent the further spread of African swine fever.

ASF is a highly contagious disease that affects pigs and wild boar and has spread in Eastern Europe in recent years. It does not affect humans.

The European Commission said on Thursday that a wild boar cull is the only appropriate way of dealing with the spread of African swine fever, Polish state news agency PAP reported on Friday.

Hunters, however, branded this an excessive measure.

“It is not possible to call it anything other than an animal slaughter. A significant number of hunters do not approve of these activities (the wild boar cull),” said hunter Wojciech Metler.

Thousands of opponents of the cull have shown their support by changing their Facebook profile photos to ones that feature an image of a wild boar.

In 2018 the Supreme Audit Office concluded most farms did not implement sufficient preventive measures to stem the spread of the disease, such as installing disinfection mats.