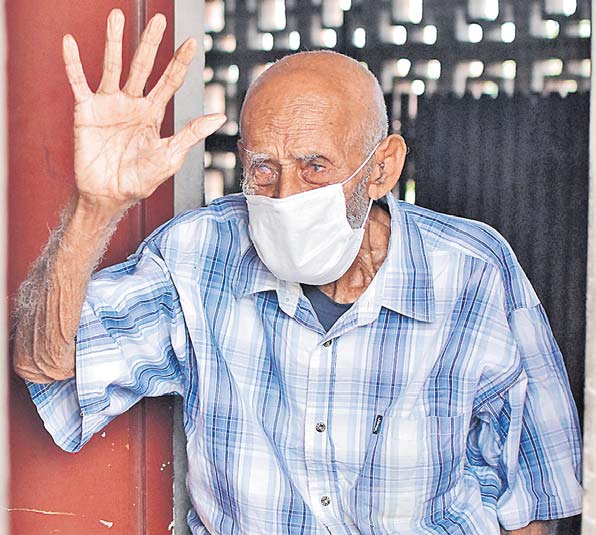 Jone Valugivaki, 106, waves from his room after his interview with The Fiji Times yesterday. Picture: JOVESA NAISUA

AN individual’s determination to achieve something in life can motivate them to great heights. Jone Valugivaki’s aim of succeeding in the world of boxing made him come across the island from Gau to Suva.

Having no proper plans or enough funds, Mr Valugivaki didn’t let that deter him.

Originally from Sawaieke, Gau, he said he was only 16 years old when he came to Suva in search of a better lifestyle and opportunities in the boxing field. “I did boxing on my island and before coming to Suva, I went to Koro Island to learn boxing.

“While learning there, I identified my potential in boxing so I decided to pursue that field and with that aim I came back to Gau to ask for support from my parents.

“At the age of 16 I came to Suva to make my name in the boxing arena, however, the journey was not as easy as it seemed.

“My parents were farmers on Gau Island so they used to send me some money to support me here in Suva, but I needed to do something on my own.

“For some years, I stayed with my relatives in Toorak, and in between that time, I used to go back to my island.”

Mr Valugivaki said he did boxing for around 15 years for a club in Toorak, Suva before venturing into the field of casual work.

“I did boxing, but at that time there was not much money in that field, so I started looking for other jobs.

“I started working for Bhanabhai & Sons after which I joined CK Patel, Mahesh Syndicate and other companies.

“I have worked for various companies until the age of 86, and in those years I created a special place in my employer’s heart that they have been supporting me until today.”

The 1915 born said his life was not always rosy as he also had to overcome major challenges in life. “Coming from an island, a village lifestyle, to Suva was very new and tough for me to adjust to.

“Secondly, I came with the determination to become a boxer, but I had no clue of where or who to approach to get guidance, but I guess God guided me to the right path.

“I did boxing while I also worked as a security guard at a wharf before starting to work in other companies at the age of 40. “So far in life, I believe I made the right decision by starting to work as I got the opportunity to earn and also meet people who became my family later.” The second eldest of four siblings said he only managed to study until class six in Gau.

“I never got married as I was always working and had my employers who were like my family and the looked after me. “Its been more than 50 years since my parents died. I was in Suva when my father died, so I couldn’t attend his funeral. “Later, my mother left us and I was fortunate enough to attend her funeral.

“I don’t know where my siblings are.” The 106-year-old considers his healthy diet the reason for living more than 100 years. “My favourite food is a tortilla, amaranth leaves curry, dhal curry and other vegetarian food.

“I love drinking ginger and turmeric tea, which I have two to three times a day, and I believe that gives me the strength to live and move around.”

Despite his advancing age, Mr Valugivaki used to climb more than 20 steps daily to reach his room before the outbreak of COVID-19.

“I love to move around and meet new people, but because of this COVID-19, my friends who look after me have advised me to stay indoors to be safe from COVID-19 and other diseases.”

He acknowledged the support provided by his friends and everyone, including the employers and employees of Curry House, Capital Customs Clearance and Forwarders Pte Ltd and Jedis Stationery at the Raojibhai Patel St.

“This building was owned by someone else before and he provided me accommodation, later when the building was bought by Jedis Stationery’s owner, it was their courtesy that they kept me.

“All the people around this building provide me with food, moral support, and other things which I need, which is a blessing for me.” The social welfare recipient said that positivism in life was important.

“The first thing I do upon waking up is praying, remembering, and thanking God for the new day.

“If there is any bad thing happening in life, it is important to find something positive in it because every event in life has something good stored for you.”

Famously known as Paisa or Joni among his friends, he advised the youths to look after their elders and respect them.

“Look after your parents, your elders, and never ignore them because they need you.”