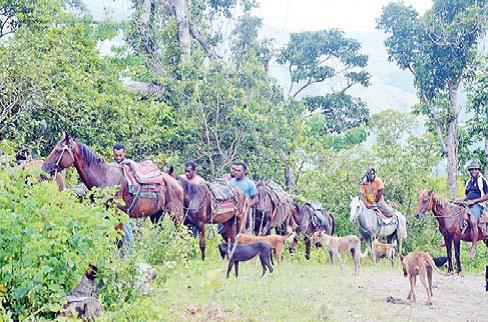 Many iTaukei tribes and villages claim they can trace their roots to the Nakauvadra mountain range in the western side of Viti Levu.

One such clan is Navatusila.

Clan member Ponipate Katolala, who is originally from Nabutautau Village, Ra, claims his forefathers came all the way from Nakauvadra following their ancestors’ path in a journey known as the ‘tualeita’.

He said there was a big chief in ancient times who went by the name Ro Kubunidakai who was the son of Rokotuivuna, and the people of Navatusila could trace their ancestry to their lineage.

“Our ancestor, Tunakauvadra who was our chief, came from Nakauvadra and the story goes that he was one of Degei’s allies,” the 60-year-old said.

Mr Katolala claimed Tunakauvadra sent the chiefs and their clans to all the different parts of Fiji to settle, reproduce and build their villages.

“During their journey the only food that they took along with them were purple yams name tidra.

“Along the tualeita, on their way to Navatusila, the elders located a water source and they cut a branch from a vuga tree known as a vugayali and this became their chief’s walking stick.”

Mr Katolala claimed that once they reached the place of the Taladrau people near the cliff of a mountain, their chief called out to them to “vadranasiga” — which meant they should rest for a while before continuing their journey.

“When they woke up the next morning, the chief said that they had to clean that place and was to be their village and he name it Vadranasiga.

“However, a strong man named Tui Caracarasala was already there.

“He had arrived earlier to clear a path for his chief and clan to follow and he had also rested in the place that would become known as Nabutautau.

“Our ancestor married Lewaitini, a woman from Noikoro and they had a son named Saukiyata.”

Mr Katolala said that the people of that clan began to marry and increased in numbers.

“They began to show their power through the increasing population but our chief was the strongest of them all.

“Eventually our chief died In Vadranasiga and they installed Saukiyata, his son, to lead the clan.

Mr Katolala said during Tuivuna’s reign, he split the sub-clan into family units so they could develop some of the land to build villages as the clan began to increase in size and he named his chiefly sub-clan, Vadranasiga.

“They also built the Tavuaicolo to be Ro Kubunidakai’s war village. He married Kurumudu, a woman of Naroyasi. Mr Katolala said Ro Kubunidakai I started a war during his leadership in Tavuaicolo and it spread through the interior of Viti Levu.

“The Colo North, Colo West and the Colo East and as his warriors were too strong.

“In those days, when a chief wanted to start a war, the protocol was they would bring a tabua to Ro Kubunidakai I to his burekalou.”

Ro Kubunidakai I was also called Kiralevu and when the high chief died in Tavuaicolo, Naividulu, his son, took over leadership of the clan.

“From there Ro Kubunidakai I two sons parted — one continued leading the clan and his younger brother Katakataimoso II went and developed Waisa to be his village.

“Katakataimoso II was also involved in the war in inland Viti Levu and after his death, his son Delaivuna took over and married Naividulu a woman of Cawanisa and they had two sons — Vatuorooro and Naivakasiga.”

There were many wars that happened under his leadership.

And in the middle of the village stood the burekalou where chiefs from the interior had to present a tabua and ask permission for them to go to war.

“There are three units in our clan. The chiefly one is Vadranasiga sub-clan (mataqali) and the name of the family unit
(tokatoka) is Nakauvadra in the Navatusila clan.

Mr Katolala said that the subclan that leads the Navatusila clan was the Vadranasiga and their ‘vu’ was Tobeyaweni and their kalouvu was Lewatu, their totemic symbol was a falcon which also represents their indigenous bird, ikanivatu represents their fish and their food is kado (taro), yam is tidra and pork.

Their chief is Kira Levu the Tui Navatusila.

Today most of the members of the Navatusila clan live in Nabutautau, Navatusila, Toge in Ba and some in Naitasiri.

“My family, the descendants of Ro Kubunidakai I, live in Toge, Ba.”