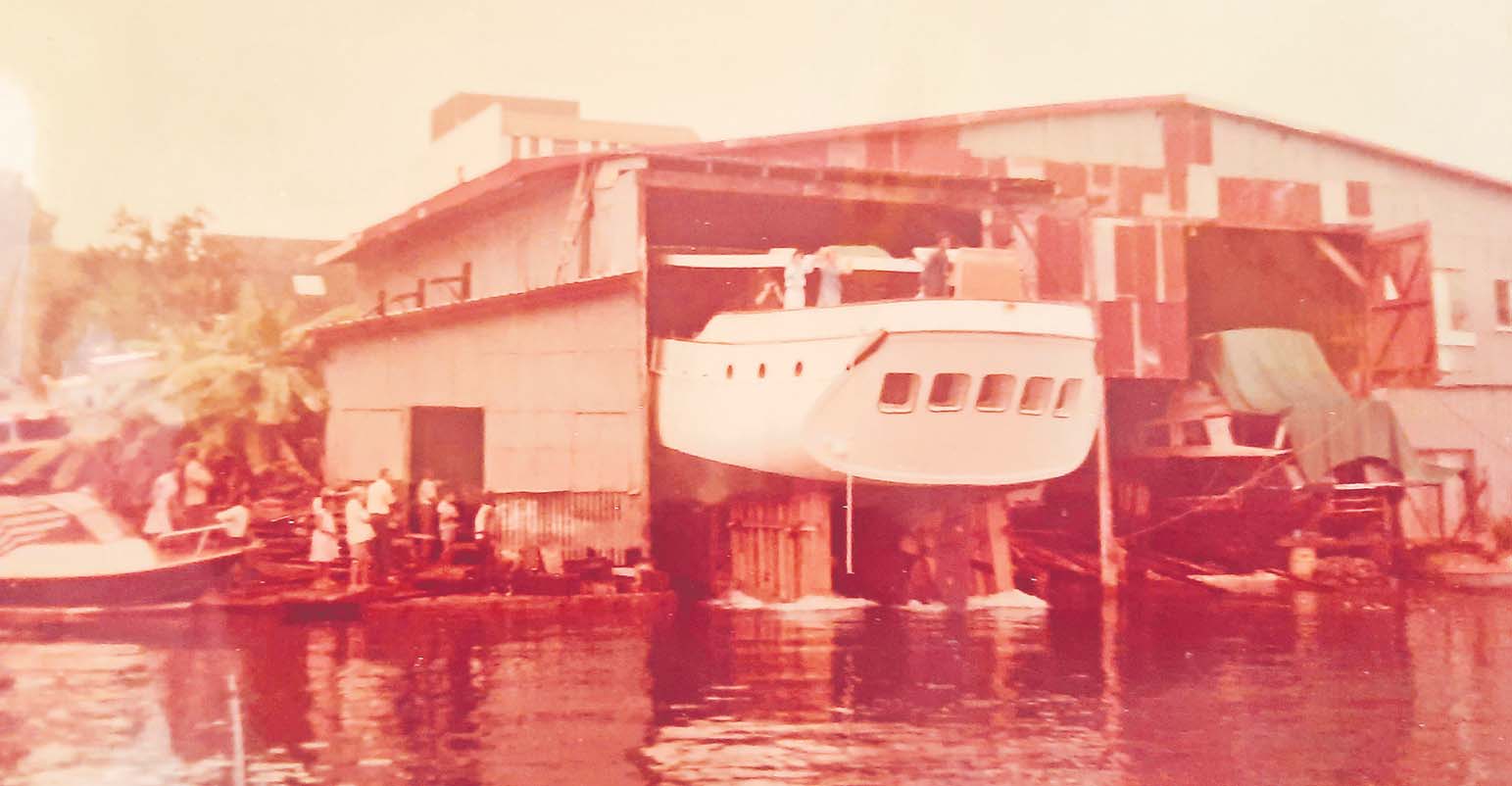 The Whale’s Tale launches out of a boatshed. Picture: Mitchell Whippy/SUPPLIED

Last week we looked at the origins of what was probably the first commercial, and at one point, the largest boatbuilding operation in the country — Charles Whippy and Company Ltd.

The shipwright with humble beginnings on Vagadaci beach, Levuka built up steam and eventually moved to the shores of Walu Bay in Suva.

At Vagadaci, the Whippy’s vessels were simply slid into the sea once they were completed.

At Walu Bay, their biggest challenge was sliding newly completed ships under the low and narrow arches of the old Walu Bay bridge.

Charles and his son Walter had to wait for low tide to perform the exercise and often had to partially build vessels and complete them on the seaward side of the bridge.

After a few years at the spot presently occupied by the Pacific Energy Marina Service Station at the corner of Harris Rd and Edinburgh Drive, Charles grandson Mitchell Whippy said they were offered the company a spot right on the harbour front, next to Narain Jetty.

“The government offered 24 Tofua St so we would have direct access to the sea,” he said.

“No more filling hulls half with water to get it under the bridge.”

After making the move to Tofua St, the company really began to grow and business was buzzing.

At any one time, more than 60 skilled tradesmen, apprentices and assistants could be found working on the boatshed floor.

The size of the expanding workforce was equally met by increase in the size and capacity of vessels the company began to produce.

In 1978, they began working on the Markson, a 136-foot long cargo ketch designed by Kiwi naval architect Brian Donovan, built for a Mr Rusden.

The keel was laid, the frames were set and the vessel began to take shape.

“As we got to building the wheelhouse, we realised the roof of the building was not high enough.”

The wheelhouse is the area on a vessel from where she is sailed, usually up high in the superstructure and also referred to as the bridge.

“We had to make adjustments to the roof before we could carry on building the wheel and when she was launched, Markson had about an inch of clearance between the roof of the wheelhouse and the adjusted frames that held up the roof of the building and the sides.”

Markson went on to transport timber from Fiji to New Zealand for about two years before its conversion into a fishing boat and then to a luxury yacht.

The last he heard of the Markson, she was in Mexico and was about to begin a transpacific voyage to attend a boat show in South Australia for yachts over 100-feet in length.

“That was over 20 years ago now, I haven’t heard from her since.”

Another floating example of the Whippy’s workmanship is the Whale’s Tale, a 100 foot schooner built in 1985.

“Construction on the Whale’s Tale was started in Savusavu by Jack Morris, a renowned boat builder in his own right.

“It was towed to us in Suva and we finished it off.”

Mr Whippy said when the Whale’s Tale arrived at the boatshed they had to change all the framing.

“Jack used vesi for the framing, a hardwood.

“We had to swap all that vesi out for dakua because hardwoods are too dense and won’t absorb the glue that we use in wooden boatbuilding.”

The Whale’s Tale still plies her trade as a cruise ship operating out of Port Denarau and information on the website says she was “completed at a cost approximately $1 million”.

When asked if, as a boatbuilder, he had constructed a vessel of his own, Mitchell told The Fiji Times about the Killer Whale.

He said it was his personal boat and he used her as a platform to test different forms of marine propulsion.

“She was jet powered, and then we tried a stern drive and later outboard engines.”

She is also still floating and still one of the most interesting looking boats moored at the Royal Suva Yacht Club basin and now belongs to his son-in-law.

The company was retained by the Whippy’s and remained at Tofua St until it closed in 1991.

He said there came a time when no more tradesmen could be found to build boats and when fibreglass boats started being built, the speed at which they could be built meant traditional wooden shipwrights like the Whippy’s could not compete.

“There were just no more tradesmen, systems changed before they could get a job and work with skilled men.
“Now a lot of them have qualifications but no experience.

“Wooden boatbuilding is a craft, it takes time and skill, it’s still cheaper to build with wood, but it takes longer too.”

He said the government at the time had also started pushing for timber exports and the right timbers for building boats could no longer be acquired in the same volumes.

“You need a vast amount of timber to build wooden boats and it all comes down to the availability of timber.”

The business was sold to Don Pickering who later sold up and returned to Taveuni.

While the actual number of vessels that were built by the Whippy’s is not quite known, the fact remains that they had a definite impact on the shipbuilding and marine industries in Fiji and it all started on a beach in Levuka.