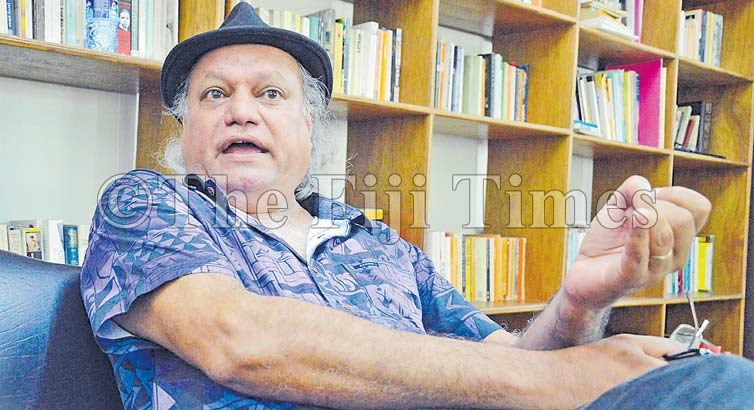 For Professor Sudesh Mishra, a Fijian poet and academic, poetry came to him as a form of visitation.

“Poetry chose me,” he says. “If one is chosen, one has to work at the language, the music and the craft and that, for me, is a lifelong devotion.

“All I can do is wait for my muse to come visiting and when she does, there’s a loss of self.

“Poetry is my ladder to all that I am not.”

Prof Mishra started the art of writing while at Shri Vivekananda High School in Nadi.

“The muse of poetry visited me when I was a teenager and she has never forsaken me since.

“It’s been quite a ride and you have to be me to understand what that means. To rephrase Leonard Cohen, ‘if I knew where the good poems came from, I’d go there more often’.”

“It delights me that my work evades national boundaries and you might say the same for the language I write in, English,” he says.

He says his latest writings have been included in The Penguin Book of Indian Poets, an ultimate anthology of Indian poetry in English, edited by critically acclaimed writer and poet Jeet Thayil.

“I have 10 poems included in that anthology which have received rave reviews from Salman Rushdie and Michael Ondaatje, both Booker Prize winners. “The editor, Jeet Thayil, asked me for the poems.

“He edited two earlier anthologies, which contained a raft of my poems, Sixty Indian Poets and The Bloodaxe Book of Contemporary Indian Poets.

“Jeet’s notion of India includes writers from the Indian diaspora and he echoes Amitav Ghosh’s remark that India is a portable concept in that we carry it everywhere with us.

“He has included Caribbean poets of Indian heritage in the book, which might explain the inclusion of a Suva-born poet who traces his roots to indentured workers from North India.

“It appears that I cannot shake off my history.” Prof Mishra says his poems cover a range of themes in the publication.

“One contemplates the sea’s lack of a face, hence the self-effacing sea.

“Another argues that a rose cannot be a rose by any other name and so disagrees with Shakespeare, who claims the contrary in Romeo and Juliet.

“There’s a poem that lists human brutality, terrorism, murder, disfiguration and rape, but ends in hope with the dusk dreaming of dawn.

“Another muses on the capacious and inclusive nature of poetry. A prose poem pays homage to the work of VS Naipaul.

“One verse even makes the egregious claim that the greatest gift is not to write at all. The paradox, of course, is that one has to write it.”

Prof Mishra says he enjoys locking heads with Shakespeare and is fond of the following poem written by Mishra himself, titled ‘A Rose is a Rose’:

In the simple poem composed simply The sun’s never likened to a brass gong.

Conceits fail to plunge from the sky. A song Is sung for the joy of singing freely. No noun strays into rouged alleys.

A gun Kills, yes, but kills neither poorly nor well. The dead are not brought alive by a spell.

All are murdered in the murder of one. Ice is cold, fire hot: these are simple facts. The simple poem loves a window that lets in The sky simply because the sky’s let in. A bug’s life is not rehearsed in five acts.

Mirror and meaning are one and the same. A rose is a rose by no other name.

Prof Mishra says his family, friends and colleagues form a captivated audience and he keeps them entranced with his passion for poetry.

“Poetry is a specialised art form and I only take notice of critics who understand the inner workings of the craft.

“Do I completely grasp the craft? Not at all, but I work very hard at it.”