PNG Police Minister Kramer: I do not arrest people, but depoliticise the force 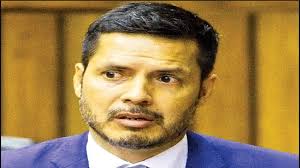 Kramer said this in response to questions in Parliament raised about allegations within the PNG Defence Force.

Vanimo-Green MP Belden Namah had asked Kramer about his recent calls to arrest those involved in crimes against the people.

“I hope you will live up to what you have been preaching to this side and arrest people responsible for crimes against the people,” Namah said.

He said the police force was underfunded to a level where policemen and women could not operate and the fraud squad office was politicised and handicapped.

“There are serious allegations in PNG Defence Force,” Namah said, but former police minister Jelta Wong raised a point of order saying that the case was still being investigated.

“This case is under investigation and cannot be discussed in Parliament,”  Wong said.

However, Namah countered, saying he did not think that the point of order was in order.

“If it is under investigation, it must be investigated. What are you going to do in relation to the case; why is the fraud squad not able to handle this case?”, Namah said.

“I will repeat, the powers of the police minister and supported by a Supreme Court judgment, the minister for police’s primary role is in policy,” Kramer reiterated.

“We have no powers or control on the police force that is also stipulated in Constitution.

In relation to a question asked, I do not have the powers of arrest on those accused, the process is clear, a complaint is filed and the matter is then in police jurisdiction.

“My focus will be to depoliticise the force, for instance stopping people from raiding court houses and arresting chief justices. I was also a subject of arrest.

“My aim is to depoliticise the force and do their job according to the Constitution and not follow Members of Parliament around,” Kramer said.