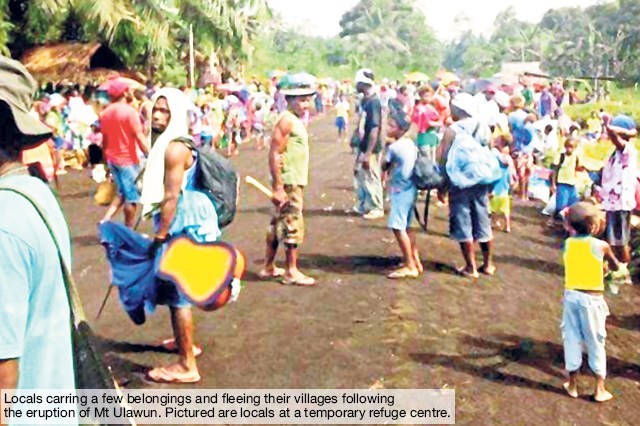 PORT MORESBY, 30 JUNE 2019 (THE NATIONAL) – The intensity and activity of the Ulawun Volcano in West New Britain have increased and people living in the immediate vicinity are advised to evacuate.

National Disaster Centre director Martin Mose told The National that the situation in the Bialla district of West New Britain had increased seismic activity on Wednesday.

“The volcano has started spewing thick black smoke and heavy ash fall in the surrounding communities as lava has started to flow at the northern valley of the volcano,” he said.

“The situation has now escalated to a level-two alert and I call on the people to start evacuating from the area.”

Mose said the volcano was at the border of West New Britain and East New Britain with a population of about 18,000 people being affected, close to 5,000 have already started “voluntary” evacuation.

“Residents have voluntarily moved to safe zones that were pre-identified in the provincial disaster management plan with the assistance of the Hargy Oil Palm Ltd.”

“We have received reports that these are people from Ulamona and Noau and they have now moved to the Kabaya community in West New Britain.”

Mose said the provincial administration and provincial disaster offices from West New Britain and East New Britain were working in close consultation with the local communities and private sectors were mobilising resources to be deployed to impacted sites to monitor and coordinate response actions in the event the situation worsened.

“But the Ulawun has an evacuation plan that was developed through the community-based disaster risk management programme that was conducted in 2018,” Mose said. This plan will now be activated to respond to the situation, we have also trained the communities to identify the signs, mobilise and evacuate so I call on them to now use those skills.

He said that volcanos behaved differently so they could not really say if it would escalate or cool down over the next couple of days but people should start moving to safer grounds as their lives were important.

Mose also said that all flights into the province had been grounded due to heavy ash fall.

“The Government has decentralised the efforts from national to provincial, district and local level government (LLG) levels. All levels must now be fully resourced with funds so that they can respond swiftly and effectively to outbreak of disasters.

“At the moment, some provinces have only one person while others have no office,” he said at the PNG National Disaster Risk Management Workshop in Port Moresby.

Kamnanaya said he believed the new Government would look into the disaster management needs in Budget 2020.

“It is relieving to receive support from the Australian Government through its defence force in times of emergency.

But it is also crucial for the PNG Government to be serious about disaster risk management services to filter down to villages.”

He said PNG on responded to disasters at ad hoc basis.

“When disaster occurs, we respond and we call it disaster management. But that is only a minor part of it. We have to look at the risks and take precautionary measures,” he added. “We have to be prepared always so that the cost of disaster can be minimised or lessened with anticipation.

“We assist only during the response phase and leave the rest to the government of the day,” Kamnanaya said, adding that assistance should be provided not only during a disaster and recovery stage, but before a disaster.

“The purpose of this workshop is to collate the views of national agencies for the National Reduction Risk Action Plan (2017-2030) and identify priorities and achievable actions to enhance risk management,” he added.

The workshop was facilitated by the National Disaster Centre in partnership with the United Nations Development Programme and Emergency Management Australia.