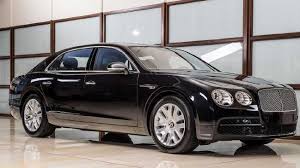 The Maserati purchase outraged many Papua New Guineans as the nation deals with the re-emergence of polio, high rates of tuberculosis infection and ongoing budget challenges.

The Australian has obtained an invoice for the Bentleys, made out to the chief executive of PNG’s APEC Secretariat, Chris Hawkins.

The vehicles were purchased from a Malaysian-based company called South Pacific Ventures Inc., which describes itself as providing “business consultancy and services on healthcare development projects in Papua New Guinea and other Pacific Island countries”.

The cars are due to arrive in Port Moresby this month by sea freight.

The Australian has sought comment on the Bentley purchase from PNG’s APEC Minister Justin Tkatchenko, but he is yet to respond.

APEC Tkatchenko said last week that the Maseratis had been “pre-sold” to private sector buyers who would take the vehicles off the government’s hands after the summit.

PNG is the poorest nation in the APEC grouping and faces an array of development challenges.

The official minimum wage is about $1.50 (US$1.07) an hour but unemployment is rife, and the majority of Papua New Guineans live outside the formal economy.

Australia is providing at least $130 million (US$92.8 million) in support to help PNG host APEC.

About 1500 Australian Defence Force personnel will also be involved, including special forces soldiers, rounding out the biggest security commitment of any nation in support of PNG’s APEC year.