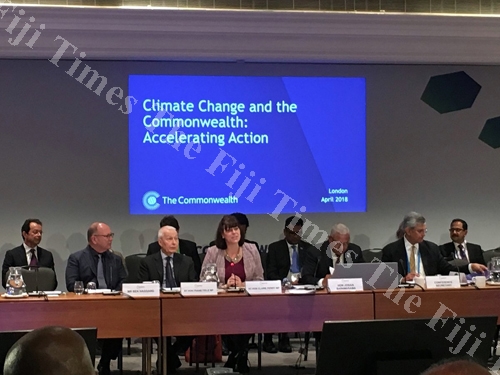 UK Minister of State for Energy and Clean Growth, Claire Perry makes the announcement at the Commonwealth Heads of Government Meeting in London with Prime Minister Voreqe Bainimarama. Picture: Supplied

PRIME Minister Voreqe Bainimarama has welcomed the United Kingdom’s support of Pacific Island Countries with the implementation of the Nationally Determined Contributions, through the Regional Pacific NDC hub that will be based in Suva. During the Commonwealth Heads of Government Meeting in London, UK Minister of State for Energy and Clean Growth, Claire Perry announced a £1.2m (F$3.5m) support for the hub.

Mr Bainimarama said though PICs had done little to contribute to climate change, they were committed to leading the world in mitigating and adapting to its impacts.

“The hub gives us a powerful new tool to develop innovative approaches for building resilience and protecting our development,” he said.

“As the Conference of Parties (COP23) president, we are calling for greater global ambition and action in 2018 under the talanoa dialogue. “This hub is one of the ways we are doing this in the Pacific.”

Ms Perry said the UK was leading the world in tackling climate change while growing the national income, and at the same time ensuring they were best placed to help other countries reduce harmful carbon emissions.

“Providing expertise to mitigate global warming and reducing emissions is a crucial priority for Commonwealth nations, and vulnerable Pacific Islands in particular,” she said.

The funding builds on the £100,000 ($F277,150) that the UK provided in response to a call from PICs towards the development of the hub in partnership with GIZ (German Agency for International Cooperation) at COP23 in Bonn, Germany, last November.

GIZ’s Coping with Climate Change in the Pacific Island Region program director, Dr Wulf Killmann said they and their partners stood ready to provide advisory and technical support to enhance and implement NDCs and integrate climate actions into development plans as well as to support the systematic review of their NDCs if and as needed.

NDCs embody efforts by each country to reduce national emissions and adapt to the impacts of climate change.