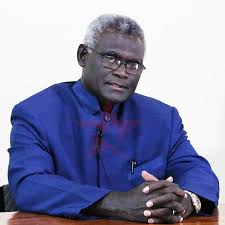 He was speaking during his first press conference following his election, Wednesday.

He said the proposed Bina Habour project for example has been around and the country for years, but is beginning to see a way forward.

He added before the end of his four-year term, an investor should be stationed and operated there.

“In other areas, there are issues such as land dispute where people are trying to deny but that’s the fact and reality,” Sogavare said.

“You cannot move projects when people do not want to see that happened,” he added.

Sogavare said a perfect example is Ma’anoba Airport Project where $60 million (US$7.4 million) have been spent before his last DCCG government came to power in 2014.

He said with that much, they thought they would go straight to open the airport but it was not until the expenses reach $70 million (US$8.7 million) before it was opened.

“And that is enough to build roads around Malaita and enough to build any other infrastructure projects in Malaita but instead the millions are just going into the hands of the people in dispute,” Sogavare said.

He added when it comes to rural development and addressing the welfare of people right into the rural areas, more than $300 million (US$37.4 million) have been spent in Malaita in the last four years.

“It was provided to their Members of Parliament through the delivery of houses, lights, sanitation just to improve the living standard of people in the rural areas.

“And when it comes to road construction, we gave five MPs from Malaita heavy machinery and these are enough to build the roads around the province,” he stated.

And when it comes to ships, he said his government gave millions of dollars in shipping grants to seven MPs in the province.

“So, when people say we fail the people of Malaita, I would really dispute that because we, like other provinces, are just looking on.

“But when this level of resources is given to that particular province; it is fine given the population of around 150,000 who require more resources,” he added.

“So, if we can total them up in terms of the implementation of the budget over the last four years, the bigger chunk of the budget resources is delivered to address the welfare of the people of Malaita which is good,” Sogavare said.

However, he said what hurts him is the downplaying of this huge assistance by certain people who claimed he failed Malaita.

Sogavare added the government did not fail Malaita and would continue to prioritise Malaita with all of its national projects.

“As in national projects, we need to strategies more because the government has been talked down especially when we want to put something but the people claimed they are not ready and came up with disputes.

“So maybe the way to go now is first we wait for people to come out and say we are ready and secondly is to be able to attract investors coming in.

“A fine example is the proposed Auluta Oil Palm project where land has already been secured but no investor was prepared to come in,” said Sogavare.

This will be Manasseh Sogavare’s fourth term serving as prime minister after stints in 2000, 2006 and 2014.

His last two terms were ended prematurely after no-confidence motions.

Sogavare has served back-to-back terms as MP for North East, while also holding ministerial portfolios in finance and commerce.

The future of the Solomon Islands’ relationship with Taiwan is under strain, with the issue coming to the fore during the country’s national elections.

China has invested heavily in the country’s infrastructure, seeking to gain influence as the Solomon Islands maintains the diplomatic ties it has held with Taiwan since 1983.

Sogavare stepped down from his role as Prime Minister in November 2017 over a political donation he allegedly accepted from Chinese companies. He has denied the claims.

Since Tsai Ing-wen became president of Taiwan in 2016, five countries in the region have severed diplomatic relations with the self-ruled island, switching diplomatic recognition to China.

Analysts say China is working hard on getting the Solomons to break off ties with Taiwan.

“China is trying very hard to get them to change sides, and I am sure they would heavily incentivise that swap, but Taiwan is equally eager to have the Solomon Islands remain. It is not standing still, and will also be proactive in incentivising them to remain,” Jonathan Pryke, director of the Pacific islands program at the Sydney-based Lowy Institute, told the Nikkei Asian Review.

Meanwhile, Australian High Commissioner Roderick Brazier has congratulated Prime Minister Manasseh Sogavare on his election, and pledged to work closely with his government.

“Australia has a strong and enduring relationship with Prime Minister Sogavare,” he added.

“We have cooperated fruitfully on many critical projects during his previous terms in office, and when he has held other key ministries such as Finance and Treasury.

“Prime Minister Sogavare warmly welcomed me to Solomon Islands when I arrived in 2016, and we have shared many warm conversations since.

“I look forward to continuing Australia’s close work with the Solomon Islands Government under Prime Minister Sogavare’s leadership on transformational projects like the Coral Sea Cable and the Tina River Hydropower project.

“The Australian Government was pleased to host Prime Minister Sogavare in Canberra as a Guest of Government in 2017.

“Together we visited Canberra, Sydney, and Brisbane, where he made many friends.

“Soon I hope to discuss with the Prime Minister another visit to Australia,” Brazier said.