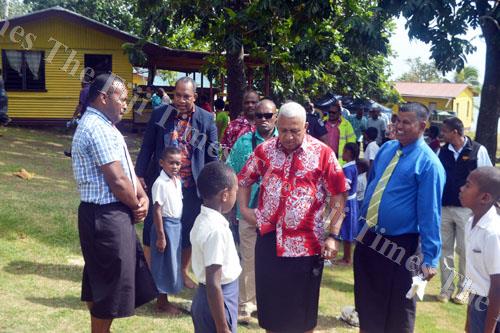 PM Voreqe Bainimarama speaks to a Galoa Primary School student who was part of the guard of honor formed performed during his tour of the school property yesterday. Picture LUKE RAWALAI

PRIME Minister Voreqe Bainimarama has refuted claims that the announcement of the 2018-2019 National Budget last week was a political ploy for the FijiFirst Government ahead of the General Election.

During his visit to the Galoa Island Primary School in Bua yesterday, Mr Bainimarama told villagers that before the budget, his Government was focused on the development and wellbeing of all Fijians and would continue to do so.

Mr Bainimarama said even though many said that development of communities and individuals was the duty of government, his administration had carried out projects that had far reaching benefits on the people.

He said development brought about by Government had been one of the fastest with rippling benefits on the people.

Villagers of Galoa Island welcomed Mr Bainimarama to the island’s school which also hosted students from the neighbouring islands of Tavea and Yaqaga. During his visit, Mr Bainimarama officiated at the opening of the new early childhood education classroom for students on the island.

While on the island, Mr Bainimarama promised villagers that his office would also look into refurbishing the school’s dormitories which had been standing for the past 31 years.