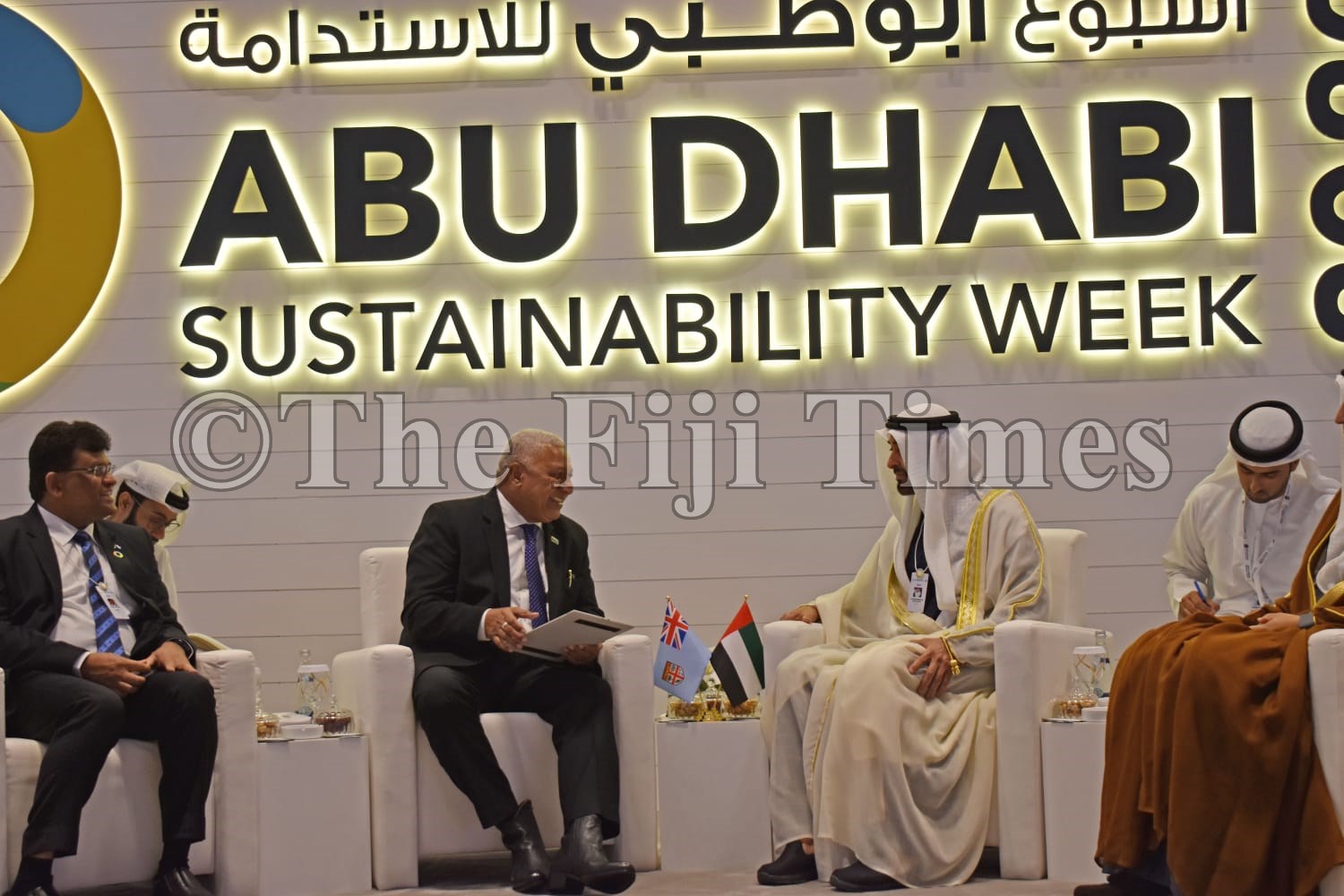 Mr Bainimarama highlighted this during a bilateral meeting with the Crown Prince of Abu Dhabi and Deputy Supreme Commander of the UAE, Mohammed Bin Zayed Al Nahyan, along the margins of the Abu Dhabi Sustainability Week Forum.

He said the relationship between the two countries has resulted in the establishment of a new UAE Diplomatic Mission in Suva.

At the meeting, Mr Bainimarama highlighted that one of the government’s primary goals is exploring and securing as many opportunities from our development partners especially the UAE so that Fiji reaches its ambitious yet possible target of 100 percent renewable energy by 2030.

He used the opportunity to convey his appreciation to the UAE Government, for the generous support of US$5 million through the initiative of the Abu Dhabi Fund for Development (ADFD) and the UAE-Pacific Partnership Fund. This support will assist Fiji with target of generating 100% renewable energy by 2030.

The initiative saw the construction of three hybrid solar systems in Lakeba, Kadavu and Rotuma which has resulted in many social-economic benefits, increased productivity, and improved health care services and education services.

Mr Bainimarama also conveyed his gratitude to the Crown Prince for the generous assistance of $10 million, through the UAE Red Crescent, which assisted in the rehabilitation and construction of three schools in Fiji  that were adversely affected by Tropical Cyclone Winston in 2016.

On education, Mr Bainimarama said Fiji is looking forward to more education opportunities in the UAE for Fijian students and civil servants.

He said he fully recognised that UAE has some of the world’s finest educational institutions which some of our Fijian students had previously benefited from.

He also discussed with the Crown Prince the issue of visa waiver for all Fijian passport holders entering the UAE. This, he said will open doors for deeper and meaningful engagements between the two countries and its people at all levels.

A total of 250 Fijian nationals are currently working and residing in the UAE.

Mr Bainimarama said this is a significant number in addition to the Fijian peacekeepers who serve the United Nations in the region.

He Bainimarama also said he would like to see more employment opportunities for Fijians in the UAE.

In response, the Crown Prince, among other discussions, said he appreciated the Bainimarama-led government’s efforts of establishing the UAE Mission in Fiji.