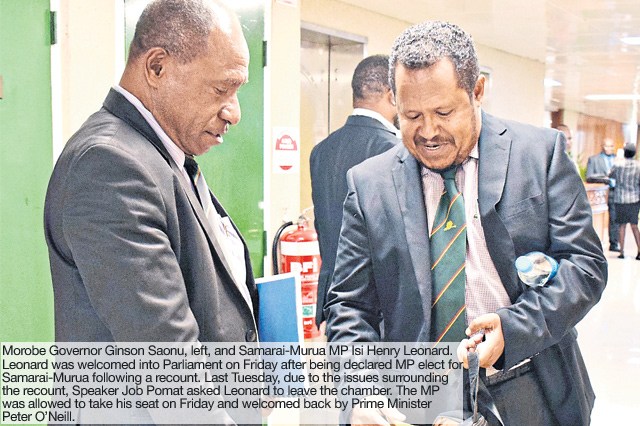 O’Neill was responding to questions from Samarai-Murua MP Isi Henry Leonard on the increase in piracy in the waters off Milne Bay.

Leonard said on Oct 5, 2016, Samarai locals and those on surrounding islands impounded a Vietnamese vessel which was placed under the custody of Samarai police. But the next day, the crew from mv Tama, owned by the former Samarai-Murua MP Gordon Wesley, allegedly boarded the impounded vessel and stole K109,000 (US$33,520) worth of beach-de-mer, 1900 litres of diesel and personal properties and cash.

Leonard said those involved were charged and committed to stand trial at the National Court while the case of the former member came to a dead end under the vetting committee chaired by the police commissioner.

O’Neill said the concerns on piracy or the thefts on the Vietnamese boat was a matter being investigated by police and the investigations and the courts must be allowed to address that issue.

“It’s not for me to judge whether someone is committing a crime or not but piracy in general in Milne Bay is a huge concern,” he said.

“We have got people running around the islands of Milne Bay, holding up people at sea.”

O’Neill said some perpetrators were known by people in Milne Bay but they were being protected.

“They need to hand the suspects across to police and let the police arrest them and they must be held accountable for their actions,” he said.

“I will also find out from the police commissioner whether he had directed someone who is committing a crime not to be charged as I don’t think he has the powers to do so.

“The powers of charging are with the investigation officer to charge anyone who he investigates,” O’Neill said.

Meanwhile, Milne Bay police are yet to arrange for interpreters to formalise a police identification process on the Asian foreigners captured with their vessel last week.

The Asian community is slow to come forward to assist as six Asians and one Briton are locked up at Alotau police cells after PNG Defence Force patrol boat intercepted their vessel last Tuesday between the waters of New Britain and Milne Bay.

According to provincial police commander Chief Inspector George Bayagau, the men are currently detained under immigration laws as investigation continues. The men were caught after their boat encountered engine problems and was afloat.

Provincial authorities believe the passengers of the vessel had off-loaded a stash containing the illicit drug cocaine which was discovered by villagers on Budibudi Island in the Samarai-Murua District on May 7.