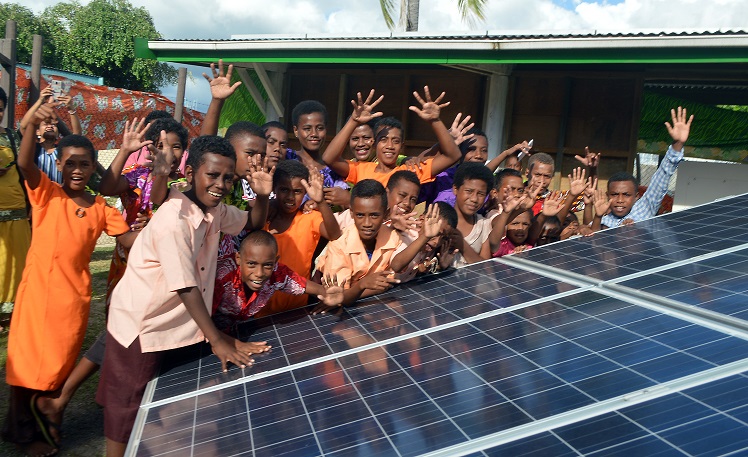 Children with a smile standing next to the solar energy system during the launch of the Vio Island Rural Electrification Project. Picture: REPEKA NASIKO

He said the island and its 57 households were being threatened by large waves that entered homes during cyclones.

“Some of the houses are situated right near the edge of the island,” he said.

“We have mangroves planted around the island but sometimes it is not enough to stop the waves.”

He said a sea wall would address the problem, adding they had lived with the situation for more than 30 years.

One of the residents whose home sits by the edge of the island is 63-year-old Vasemaca Ratukabu.

She said when her family arrived more than 30 years ago, the island was not as populated.

“We had a lot of space and our house did not lie so close to the sea.

“But now we can see the tides coming in and taking some of the land.”

The issue was raised with Prime Minister Voreqe Bainimarama during his visit to the island earlier this week.

Mr Bainimarama said the request for a sea wall and an evacuation centre from villagers was a common occurrence for Government.

He said they were making every effort to secure funds for the construction of the sea walls and evacuation centres.

The Prime Minister, however, reiterated that evacuation centres were not community halls and should not be used for village functions.