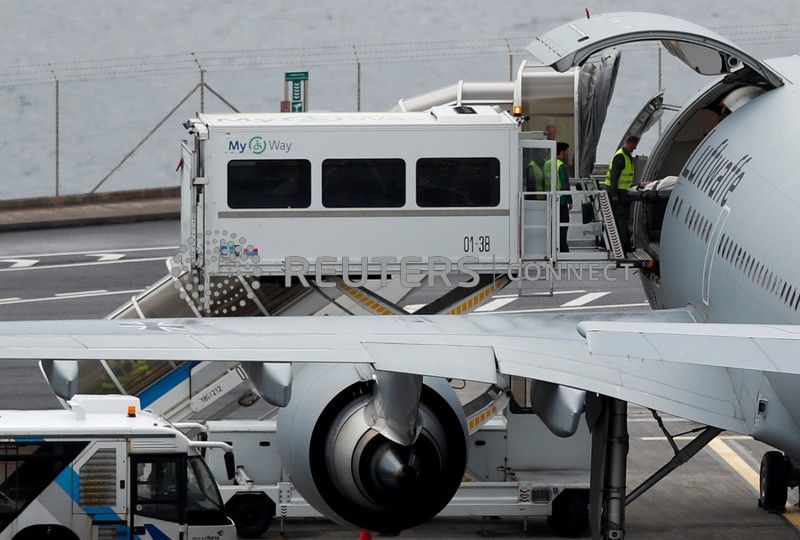 An injured German tourist involved in a bus accident, is helped onto a German Air Force medical airplane at Cristiano Ronaldo Airport in Funchal, on the island of Madeira, Portugal April 20, 2019. REUTERS/Rafael Marchante

COLOGNE, Germany (Reuters) – An air force medical plane carrying the injured survivors of a bus crash that killed 29 German tourists in Madeira landed in Germany on Saturday as authorities on the Portuguese island investigate what caused this week’s accident.

The Portuguese driver and tour guide were among the 27 people who were injured when the bus veered off a steep road in the coastal town of Canico on Wednesday.

A line of ambulances was seen on a road at the Cologne-Bonn airport in western Germany as the medical plane brought home 12 of the survivors.

Eleven of the injured Germans have already been discharged from hospital. Another was transferred to Germany on Friday and one will stay in hospital in Funchal, Madeira’s capital, a hospital spokesman said.

The driver and tour guide will also remain under observation in hospital, the spokesman added.

Images taken by Reuters photographers showed some of the injured being carried inside the plane on stretchers before it left Madeira.

The company that owned the bus said it was cooperating with authorities investigating the crash, which killed 17 women and 12 men. Many of them were pensioners, German newspaper Bild reported.

Autopsies and post-mortem examinations have been concluded, Portugal’s Justice Ministry said in a statement and authorities are waiting for data including fingerprints and dental records in order to confirm the victims’ identities.