Pistol that Van Gogh used to shoot himself sells for $145,000 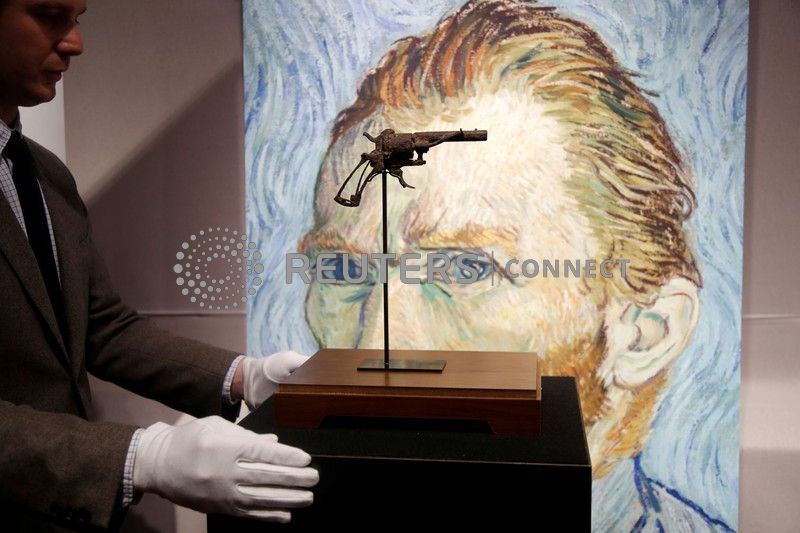 PARIS (Reuters) – The gun Dutch artist Vincent Van Gogh is believed to have used to commit suicide in France in 1890, shooting himself in the chest after years of mental anguish, sold for 130,000 euros ($145,700) at auction in Paris on Wednesday.

An anonymous phone bidder took home the Lefaucheux revolver, its casing heavily rusted and the inlay of the curved handle missing, for more than double the highest estimate put on it by experts at auction house Drouot.

“It is a very emblematic piece,” said auctioneer Gregoire Veyres. “The fact that it’s a gun, it’s an object of death. And if Van Gogh is Van Gogh, it’s because of his suicide and this gun is part of it.”

Van Gogh suffered bouts of psychosis and deep depression throughout his life, with his torment often infusing his art, whether intensely painted self portraits or other notable works including The Starry Night and Sunflowers.

He is also notorious for having chopped off part of his own left ear with a razor blade during an argument with fellow artist Paul Gauguin.

Van Gogh died at Auvers-sur-Oise near Paris in July 1890, aged just 37, more than two days after shooting himself in the chest in a wheat field where he had previously painted.

After failing to kill himself instantly, he stumbled back to the inn where he was staying and was looked after by the innkeeper, Arthur Ravoux, and his daughter Adeline, who was 13 at the time and recounted the events more than 60 years later.

“I have tried to kill myself,” Van Gogh is reputed to have told Ravoux. The artist had spent more than two months at the inn, producing a whirlwind of some 80 paintings in what would be his final, distraught flurry of creativity.

Searches for the gun began the day after he died but the likely weapon was not found until the 1960s, in the same field, with the correct calibre and showing indications that it had been fired.

It was discovered by a farmer and ended up in the possession of a woman whose child was the seller.

“There are lot of indicators that favour its attribution,” said Veyres.

Exhaustive efforts to confirm the gun’s link to Van Gogh, including tests that established it had been buried for 50 to 80 years, led to a 2012 book.

A similar Lefaucheux revolver used by Paul Verlaine to try to kill his lover and fellow poet Arthur Rimbaud in 1873 was sold at auction in Paris in 2016, fetching 434,500 euros.

EFL says there were no anomalies in complainant’s bill