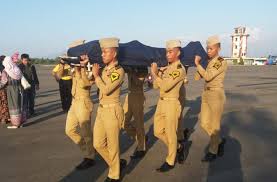 The body of air traffic controller Anthonius Gunawan Agung, who died in Friday's earthquake, is carried to a helicopter during his funeral procession in Makassar, south Sulawesi, Indonesia September 29, 2018, in this picture obtained from social media. Picture taken September 29, 2018. AIRNAV INDONESIA/via REUTERS.

PALU, Indonesia (Reuters) – An Indonesian pilot hailed an air traffic controller who died in Friday’s earthquake as a “guardian angel” for ensuring a passenger plane took off safely before he jumped in vain for safety.

Anthonius Gunawan Agung, 21, was among at least 1,230 people who died in the devastating 7.5-magnitude quake and tsunami that hit Sulawesi island.

When disaster struck, Agung did not follow others leaving the crumbling four-storey control tower at Palu airport.

“He was saying it in a very calm manner, because the earthquake hadn’t started yet,” Mafella told Reuters.

Then the earthquake struck.

“I felt that the aircraft was moving slightly to the right and to the left,” Mafella said.

Agung waited for the plane, bound from Palu to Makassar, to become airborne before leaving the control tower, authorities said.

“He stayed… until the last of my departure, until the tower was shaking very bad,” Mafella added. “Once he made sure that the aircraft had departed safely, he jumped from his tower to the lower level.”

The air traffic controller broke his arm, leg and ribs in the fall and died from his injuries, authorities said.

Air Navigation Indonesia said in a statement that it would posthumously raise Agung’s rank by two levels as a sign of appreciation. The company tweeted out images showing Agung’s body being carried to a helicopter during his funeral procession in Makassar.

Indonesians praised Agung online, with many saying his story had brought them to tears. Several artists created tributes in his honor that were widely circulated on social media.

“I think he did a very heroic action, he did his job professionally, and I think he should be honored,” Mafella said. “I call him my guardian angel.”