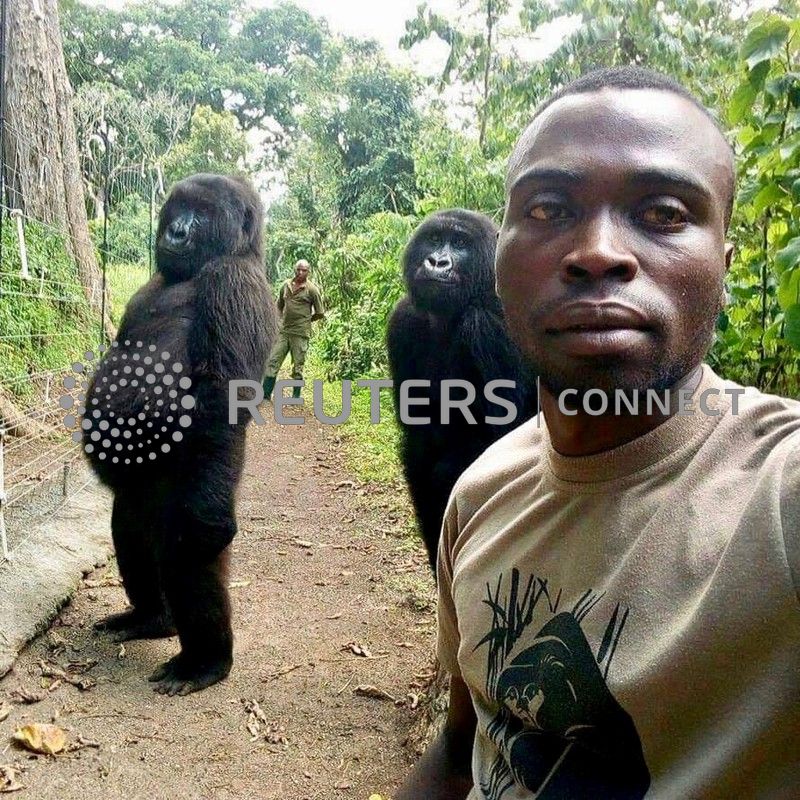 Mathieu Shamavu, Virunga Ranger and caretaker at Senkwekwe Center for Orphaned Mountain Gorillas poses for a selfie with two gorillas at Virunga National Park, Democratic Republic of the Congo April 18, 2019 in this picture obtained from social media April 25, 2019. Mathieu Shamavu for www.virunga.org via REUTERS

(Reuters) – Standing casually and turning their heads to stare straight at the camera, Ndakazi and Ndeze look like any cool selfie pros – only these posers are gorillas.

The picture showing the two orphaned female gorillas posing like humans was taken in Democratic Republic of Congo’s Virunga National Park and has gone viral since it was published on the park’s Instagram and Facebook pages this week.

Mathieu Shamavu, Virunga ranger and caretaker at the park’s Senkwekwe Center for Orphaned Mountain Gorillas, said he was out walking with Ndakazi and Ndeze when he spotted a photo opportunity.

“We let them loose so they are at ease. They were curious about what was happening. They stood up. And when they stood up, I took my phone because I didn’t want to lose the shot because it was exceptional,” Shamavu said in an interview.

“When they saw me take out my phone they dropped what they were doing, spotted the camera and watched.”

Ndakazi and Ndeze were raised by caretakers at the Senkwekwe Center after being rescued in 2007 when they were babies.

The park, which lies amid the volcanic mountains of Central Africa, is home to more than half of the total population of mountain gorillas, an endangered species facing threats from poachers and armed groups.

“You see they can walk one or two metres on two legs but also these animals are so used (to humans), they like to imitate and do what people do,” Shamavu said.

“We are always together, we feed them, we walk with them, we accompany them in their natural environment, we are in charge of their security. This is why these gorillas are used to us, their guardians and no one else, no journalist, no visitor would have been able to take this photo.”

The park was closed last year after gunmen kidnapped tourists and killed a ranger trying to defend them. It reopened in February this year, but less than a month later, militiamen killed a ranger there.