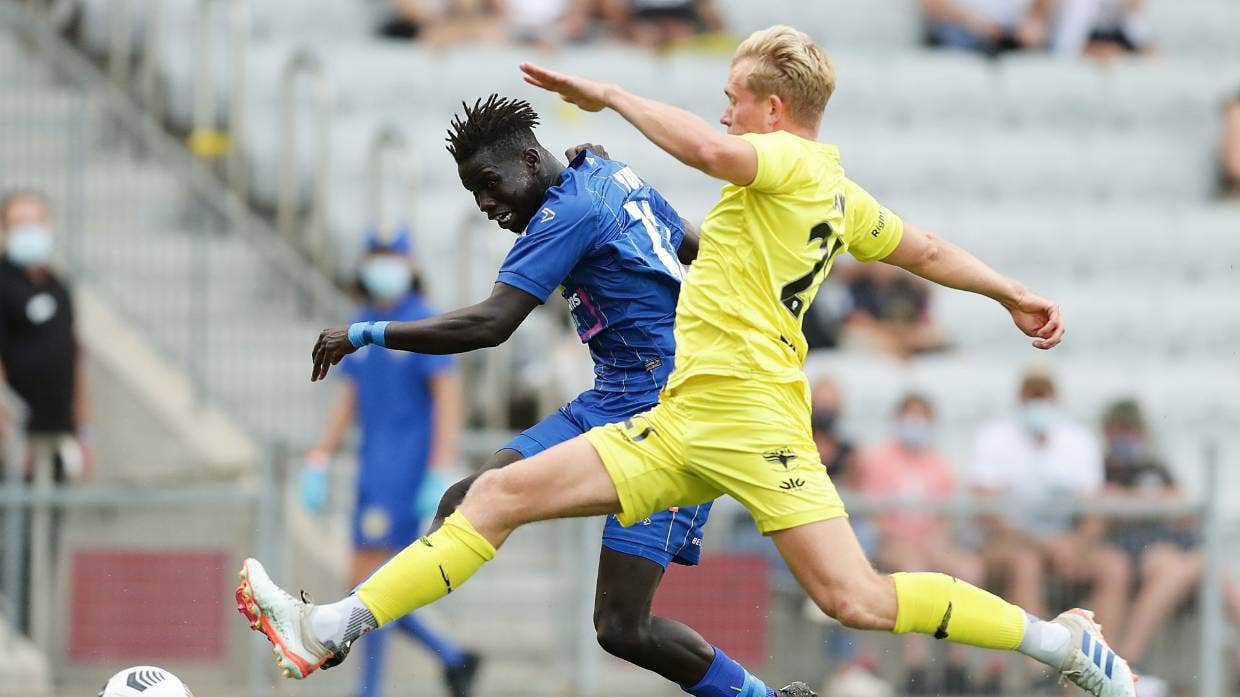 Wellington Phoenix remain winless in 2021 after slumping to a toothless 2-1 defeat to wooden spoon favourites, the Newcastle Jets.

The Phoenix dominated the shot count at WIN Stadium in Wollongong on Sunday but conceded twice after being hit on the counter attack.

“It was a frustrating night,” coach Ufuk Talay said. “We had [23] shots, we created some good chances but weren’t clinical in the box and if you don’t score goals you don’t win games.”

The in-form Valentino Yuel stunned the Phoenix to score against the run of play after being played in by strike partner Roy O’Donovan, burning off Joshua Laws and beating Stefan Marinovic inside eight minutes.

Much to Talay’s annoyance, O’Donovan then doubled the lead early in the second half after beating the offside trap following a precise through ball from Steven Urgakovic and finishing past Marinovic, who had charged out of the penalty area but failed to close the Irishman down.

Despite finding a way back into the game when captain Ulises Davila slotted a late penalty, the previously pointless Jets soaked up the pressure to avoid setting an unwanted record of being the first team to start an A-League campaign with five consecutive defeats.

Talay said he was disappointed by the way his team conceded, particularly on the second goal.

“We got hit in transition a couple of times and I think the second goal we could’ve dealt with it a lot better.

“We had three players behind the ball but didn’t track and the runner and I think a poor decision from Stef made it easier for him to tap it in.”

Searching for a first win of their own after losing to Sydney FC and drawing against Macarthur FC, the Phoenix came agonisingly close to scoring inside the opening five minutes but star signing Tomer Hemed squandered the early opportunity, setting the tone for the rest of the game.

One-on-one with goalkeeper Jack Duncan, Hemed was felled when he clipped defender Nigel Boogard in the process of shooting.

Talay thought Hemed may have been fouled but referee Alex King correctly awarded the Jets a freekick for handball because the former Brighton and Hove Albion striker purposely grabbed the ball to stop the play after hitting the deck, in the hope he could win a penalty.

King’s decision was upheld by the Video Assistant Referee.

“We were on the front foot and we could have scored before they did but unfortunately we couldn’t capitalise on what we created.

“Football is about confidence, you score a goal early or you win a game 1-0 and that builds confidence in players, and what’s what we need.”

The Phoenix managed 23 shots to the Jets’ 11 but failed to beat Duncan from open play, hitting the frame of the goal through Davila and David Ball.

Talay made two changes to the starting 11 following the Phoenix’s most recent draw with Macarthur FC a fortnight ago, with Jaushua Sotirio and Matthew Ridenton replacing Clayton Lewis and the suspended Alex Rufer.

Sotirio was wasteful up top while Ridenton failed to assert himself in Rufer’s absence and was substituted early in the second half as Talay rang the changes in search of a breakthrough goal.

Fullbacks James McGarry and Tim Payne were bright spots for the Phoenix, regularly bombing forward and creating chances for their forwards, who were ultimately unable to provide the finishing touches, while substitute Louis Fenton also made a positive contribution when he replaced Payne on the right.

Marinovic prevented further embarrassment when he palmed away an ambitious bicycle kick from Boogard with 10 minutes remaining before the tenacious Cameron Devlin won a late penalty which his captain coolly converted by sending Duncan the wrong way, setting up a grand stand finish.

The Phoenix have not tasted victory since July last year and next play surprise leaders Central Coast Mariners in Gosford next Sunday.

“Maybe I’ll have to start the boys with some finishing this week and they might be hungry and might actually hit the back of the net,” Talay said.

“That’s one thing that we definitely need to improve on because we can’t go through games where we create a lot of opportunities and not score.”