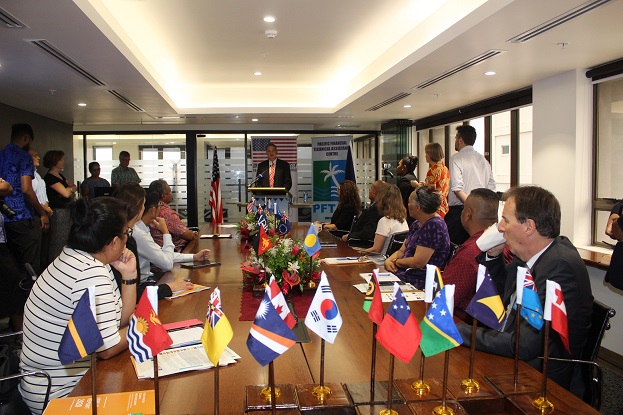 PFTAC steering committee during the announcement by the US Embassy on its support for PFTAC. Picture: SUPPLIED.

The United States became the seventh donor to the Pacific Financial Technical Assistance Center (PFTAC) with its $US2 million ($F4.07m) contribution.

US Embassy charge d’ affaires Tony Greubel today said they were pleased to become, for the first time, a donor to the PFTAC.

“US support for PFTAC’s work is particularly timely as the region faces devastating economic shocks resulting from the COVID-19 pandemic with its associated shutdowns in tourism and travel, challenges in trade, and other impacts on Pacific economies.

“And to join other members and donors in supporting this key regional entity working to promote the macroeconomic stability and development of its Pacific islands members. As a Pacific nation, the United States has a strong and enduring interest in the security, stability, and prosperity of our close partners and neighbors in the Pacific,” Mr Greubel said.

PFTAC co-ordinator David Kloeden said their donors such as New Zealand, Australia, Canada and now US to name a few, provided 90 per cent of their funding while the 16 Pacific Island member countries made up the rest of the donors.

PFTAC was established in 1993 as the IMF’s first regional technical Assistance (TA) center and it is now part of a network of 17 IMF Regional Capacity Development Centers globally.