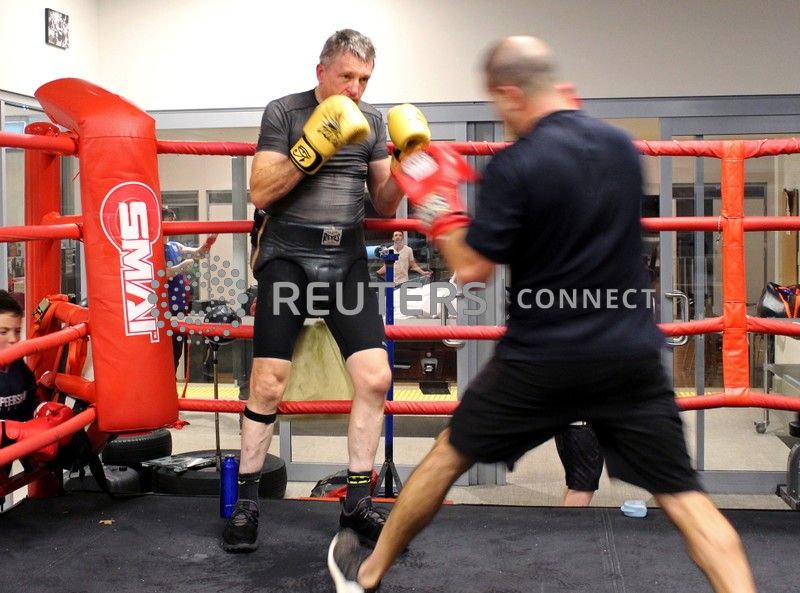 Father Dave Smith spars with his boxing partner at his academy near the church he leads in Sydney, Australia May 2, 2019. REUTERS/Jonathan Barrett

SYDNEY (Reuters) – It’s Thursday night training at Father Dave Smith’s boxing academy, opposite the Anglican church in inner-west Sydney he has led for almost 30 years, and he’s working off some frustration ahead of the May 18 federal election.

On his mind is Australia’s treatment of refugees and its system of offshore processing centres, whereby asylum seekers arriving by boat are sent to facilities on remote Pacific islands.

“For God’s sake, if we’ve reached the stage where we are talking about the danger of compassion then we’ve really lost our moral compass,” said Smith, who at 57 is also Australia’s oldest professional boxer, as he traded jabs with a sparring partner.

“Concern for the vulnerable should surely be at the forefront of what the Christian community is about.”

More than half of Australians call themselves Christians, according to the most recent census.

But unlike more conservative equivalents elsewhere, Australian Christians are known to abruptly shift their vote based on wide-ranging social issues including family values, climate change policies and treatment of refugees.

Like Smith, many Christians have expressed unease about Australia’s hardline refugee policies in recent years. But with both the governing Liberal-National coalition and the main opposition Labor Party more or less aligned on the issue, neither side has captured churchgoers en masse ahead of this election, according to Smith and several other Christian leaders interviewed by Reuters.

If Australia has a Bible Belt, it would be located on the suburban rims of the country’s major cities, densely populated areas which invariably determine who wins the election.

John Black, the founder of demographic profiling company Australian Development Strategies and a former Labor senator, said while working families provide the grunt behind an election swing, religious voters can create the leverage to win battleground seats if convinced to vote as a bloc.

“Australians do tend to be quieter about their faith than Americans and you see a lot of moderate left-type people,” said Black.

Past leaders who have successfully tapped into that voter base have fared well.

Former Labor leader Kevin Rudd snatched the flock, and election victory, from conservative Prime Minister John Howard in 2007, campaigning on a platform steeped in social morality during the then emerging global financial crisis.

But political leaders have been largely unable to inspire Christians to vote as a bloc since, which might be explained by the broadness – and elusiveness – of the religious vote.

In a statement on election priorities, the Australian Catholic Bishops’ Conference said climate change, caring for the vulnerable and improving the plight of the country’s indigenous population should be on the minds of cathedral-going voters.

The conservative Australian Christian Lobby nominated keeping the Lord’s prayer in parliament among the most important issues affecting how Christians should vote – a subject not prioritised by other church groups.

Perth pastor Rory Shiner said his congregation appeared most concerned about Australia’s treatment of refugees, and retaining a legal right to speak freely about their faith. Laws on abortion, which is legal on request in most Australian states and partly funded by the country’s universal healthcare system, had also been raised, he said.

“I was speaking to someone who said he was leaning 60 percent one way and 40 percent the other but he had to give 100 percent of his vote to someone,” said Shiner, who leads an independent evangelical church.

Some policies that would tend to engage religious voters are not prominent this election, such as same-sex marriage, which was introduced in Australia in late 2017 after a public referendum showed widespread support.

The major parties’ climate change policies do differ, with Labor seeking a more ambitious emissions reduction target, a plan the government has said is too costly.

“In terms of issues that bring Christians together, the treatment of refugees has been at the forefront, but climate change is catching up,” said Ormerod, who is Roman Catholic.

The move attracted some criticism and ridicule on social media but Black said the coverage would play well in the suburban battlegrounds.

“Many Australians tend to be quietly religious and respect people who aren’t embarrassed by it,” he said.

Back in the boxing ring, Smith uses his lead right-hand to parry his opponent’s jab, deflecting it with an open glove like someone cooking a barbeque wards off an incoming insect, before unleashing a flurry of good-natured body shots.

Along with sweating out his frustration, Smith said he is training for his next bout which would help fund social causes including peace work in war-torn Syria and refugee advocacy campaigns at home.

In short, he’s fighting for something he believes the major parties are not.

“I think we’ll look back on this in days to come as a very dark part of Australian history, where we somehow lost our moral compass, we lost our compassion for people at risk.”