Petroglyphs – The mystery of Vatulele’s spirit path and cliff paintings 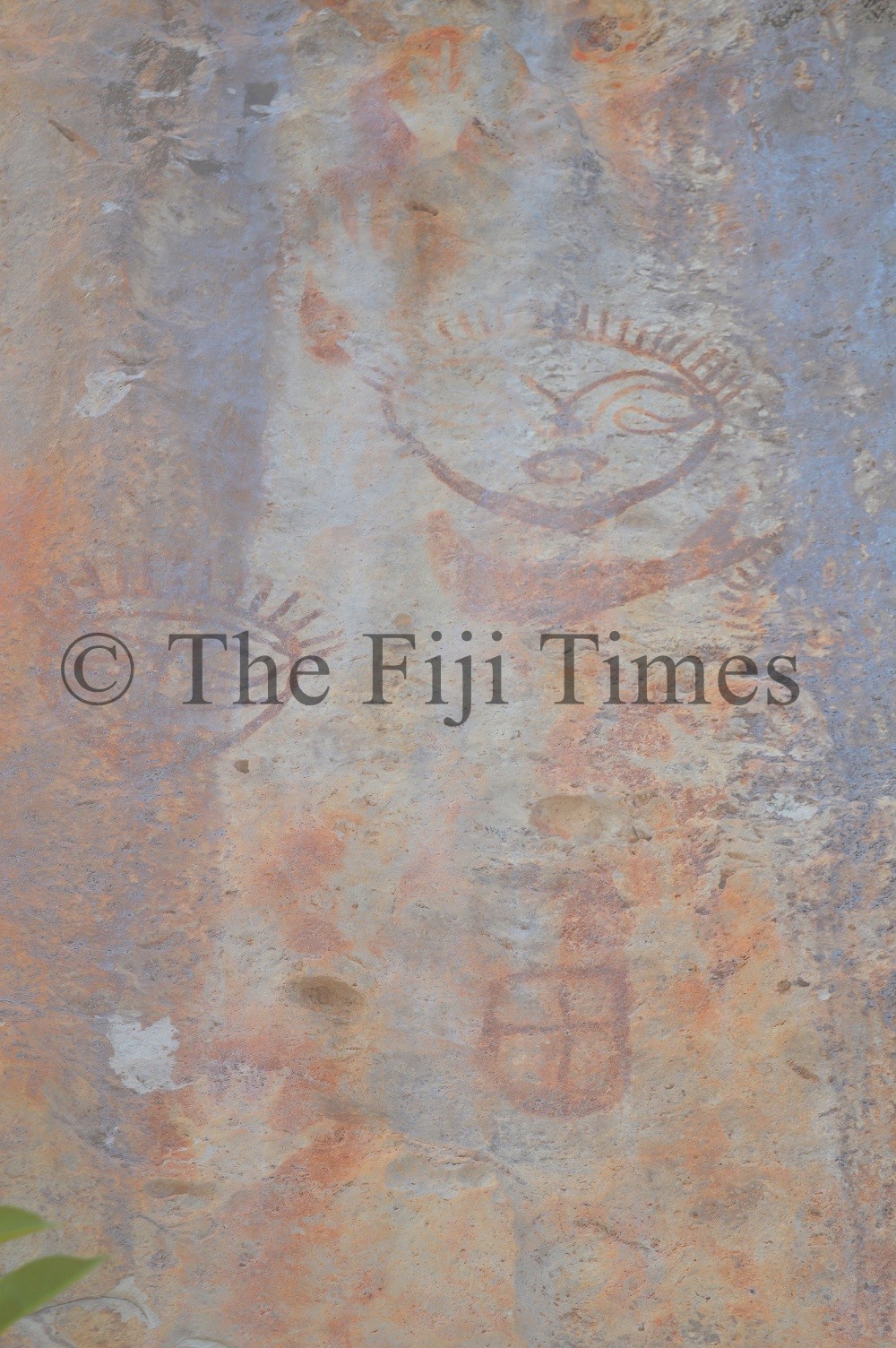 After a 30-minute boat ride from Vatulele’s chiefly capital, Ekubu, we landed on a short sandy shoreline hit by blistering coastal winds.

It was 10am and the sun was not in its usual spirited form. Skies were misty grey and shrouded by miserable falling confetti of rain.

I had arrived on the island the night before, lured by the same legends that have enchanted generations of Fijians and people from all walks of life around the world.

On my first day, nothing hit me more than the sound of a heavy thud, wood against the wood when women beat the bark of the paper mulberry plant, masi.

Vatulele’s paintings, on my second day, exuded no sound pleasing to the ears and certainly no pretty brown and black motifs to delight eyes like the women’s vamata on plain masi fabric.

Nevertheless, they took me to a dreamland of sorts and made me wonder about the painters when they were around and the purpose of their mysterious art.

Vatulele is named after a series of rocks (vatu) used by the “vu” or ancestral god from the village of Votua Lalai in Nadroga (Naviti Resort landowners) to walk from Viti Levu to the island (lele).

This he did in his quest to take as his wife, Lewa ni Cagi Bula, the beautiful princess that once lived on Vatulele.

He failed but his misery made it possible for red prawns to survive in the brackish body of water, Naura, the pond where the sacred crustaceans now live in the wild.

A boat ride to the paintings takes the traveller through breathtaking coastal scenes. You will sail through high rise volcanic slabs and watch the white ovaovabiau nest in the hundreds on rocky ledges.

The trail of destruction left behind by Cyclone Harold in April this year can be seen at the vacant Vatulele Island Resort just before the amazing limestone cliff called Bainivualiku makes its appearance on the north-western part of the island.

At the top of the cliff, the highest point on the 12-square mile island is a 41-metre high lighthouse supposedly designed by British engineer, Richard Whidborne. It is said he built it quite strong that it survived a magnitude-6 earthquake one day after it was erected.

At the bottom of the expansive cliff are two notches that run horizontally, cut by millennia of persistent wave action. The locals call them, calevu ni yalo, or the pathway of the spirits, much like its equivalent on Viti Levu, the Natualeita, a spirit pathway that runs from Nakauvadra to Verata, Ucu ni Vanua.

That cliff is an expansive vertical structure than runs along the north-western coast of the island. To have it as a natural painting billboard by people who lived on Vatulele thousands of years ago is not surprising

Roderick Ewins (University of Tasmania) in his research, “The Cliff Paintings of Vatulele, Fiji”, described the cliff as having the ability to look like a “glaring mirror” on a sunny day.

This he said served two purposes. One was, it was used as a reflector beacon, helping seafarers who sailed past during the embryonic days of marine exploration and sea adventures.
Secondly, it made the drawings adequately visible in the morning, from 6am to 9am in the colder months and earlier during hotter months.

Ewins also noted that the sun’s blinding glare made the paintings “almost loss to view until the afternoon” and even then the setting sun “tends to obscure the fainter red-ochre-coloured images”.

“This fact may explain, at least in part, why the earlier recorders (Paine 1929 and Palmer and Clunie 1970) missed most of the more northerly panels completely, and did not list all of the images on the three locations that they did see,” Ewins said.

The cliff formation, Bainivualiku, ends at a short sandy beach, close to where the series of 95 images are painted. The people of Vatulele know nothing of these mysterious drawings except the fact that it is ancient, with research putting them to be 3000 years old.

The bottom of the cliff has been eaten away by the waves and the series of drawings are at quite an elevation. Inspecting them closely requires a ladder.

“Nobody knows who drew these and when they were drawn,” Ekubu village headman and tour guide, Tuimasi Tanoa, explained.

“The fact that they are shrouded in mystery makes them rather sacred and we’ve protected them since.”

It has been suggested that a few of the drawings find areas of convergence with Polynesian art.

The red-brown colour used in the paintings is believed to be haematite, a primary and important iron ore abundant in the earth’s shallow crust.

Ewins suggests the paint was made by liquefying haematitic clay or soaking nodules of haematite in salt water to produce a rusty permanent liquid for painting.

“The paintings cannot be scraped or erased easily. The colours sink deep on the cliff,” Tanoa explained further to The Sunday Times.

“Someone once tried to remove the paintings by scraping but he couldn’t.”

The village headman’s explanation was consistent with Ewins’ research which noted that the “penetration of the staining defied the curious visitor’s efforts”.

At the limestone cliff, a common painting I found on the wall, referred to as “gallery” was that of hands and faces. Also obvious were one or two full-body figures, some animal figures and symbols. Some remained bold while others were inadequately visible.

One of the famous faces, with 12 hairs, was used as the logo of the now-closed Vatulele Island Resort.

Though the human figures of Vatulele’s paintings, which seem to be dancing, appear static they have stylistic connections with the ‘dancing’ human figures noted on old Tongan and Fijian war clubs.

According to Fergus Clunie (1986), former director Fiji Museum, the shape of the heads of Vatulele share some resemblance those of from Tonga ( Ha’apai Group), which are in turn like the shape of heads on some of the figures found in Fiji after Western contact.

The red-brown paint used in the Vatulele petroglyphs is consistent with the use of the permanent colour once used to rub on bones and valuable objects to indicate ‘mana’ in olden times.

Despite the researches done in the past, mystery still surrounds the paintings on the island of Vatulele. With no links to current chants, meke, legends and artwork passed down by forefathers, they remain an enigma.

I consulted a few elders of Ekubu, whom I thought might have a story related to the paintings but nobody seemed to know anything at all.

“All we know is they were here before we were born,” said Joana Masau.

“It was painted by giants because they are high up the wall,” another villager inferred, “they must have been thrice the height of an average adult today.”

What do the paintings mean? Why were they painted? Who painted them?
Ewins’ work provides some hypothetical reasons.

He said it was possible the painting was done by a group of ancient people who temporary stayed on the island and found the lack of water and unfavourable soil. They could possibly be the Lapita people, believed to the earliest group to arrive in Fiji.

Ewins suggested they also may have been painted over a series of visits to the island and may have been used as markers to a voyaging people. Each wave of settlers added their paintings to existing once, which explains why the smaller paintings remain bold while the bigger ones are inadequately visible today as a result of weathering.

There are also indications that the paintings may have had ritualistic significance since they lie within the vicinity of the pond of the sacred red prawns and the double cliff notches referred to by locals as calevu ni yalo (spirit pathways).

The absence of the red prawns on the cliff paintings, although there are a few animals depicted, seem to suggest they were regarded as taboo and people were not allowed to remove them from water and even illustrate them in any form.

Like many pieces of art, the petroglyphs’ future is threatened by nature itself. Hurricanes, chipping by falling rocks and trees, rising sea levels and weathering processes, though subtle and negligible, continue to displace the paintings from nature’s gallery on the island of Vatulele.

While not a single soul can pinpoint the identity of the artists and the paintings’ meanings and age, their existence on a shoreline in southern Fiji nevertheless is enough to be a point of great significance.

I certainly am lucky to be among the handful of people who have viewed them, not on the pages of a book or a computer screen but with my own eyes.

It is certainly my recommendation that you make a visit one day.

* History being the subject it is, a group’s version of events may not be the same as that held by another group. When publishing one account, it is not our intention to cause division or to disrespect other oral traditions. Those with a different version can contact us so we can publish your account of history too — Editor.