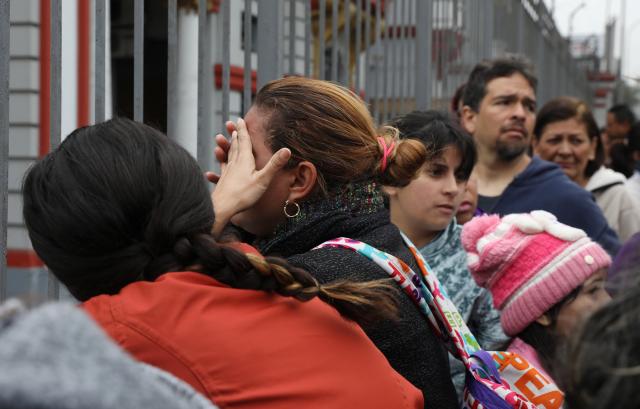 FILE PHOTO: Venezuelan migrants wait outside their embassy to register for a flight to return to their country, in Lima, Peru September 5, 2018. REUTERS/Mariana Bazo

LIMA (Reuters) – Venezuela would have to dramatically step up efforts to fly its citizens home under its new “repatriation plan” in order to come anywhere close to offsetting the 1,300 Venezuelans who enter Peru every day, Peru’s top immigration official said on Friday.

Venezuela launched the program last month after hundreds of thousands of Venezuelans migrated across the region to escape hyperinflation and food shortages at home.

So far, Venezuela has flown 2,866 Venezuelans back from South American countries, including 190 on two flights from Peru, according to Venezuela’s embassy in Lima.

But Eduardo Sevilla, Peru’s Superintendent of Migrations, said the program has had no noticeable effect on the Venezuelan population in Peru that has risen to some 437,000 and swells with an average of 1,300 new arrivals every day.

“In one day, six times as many Venezuelans enter Peru than those who have been repatriated,” Sevilla said in an interview. “There’d have to be no fewer than 45 flights every week from Lima to Caracas for those who want to leave to come close to those who want to enter.”

Migration is the latest issue on which Maduro’s government has adopted a radically different stance from international organizations and most other large countries in the region.

The United Nations’ migration agency, which estimates more than 1.6 million Venezuelans have left their country since 2015, has warned the exodus is nearing a “crisis moment” comparable to refugees in the Mediterranean.

But Maduro has denied the mass exodus and the crippling economic crisis driving it, saying that while some Venezuelans have been tempted to “try their luck” abroad, the vast majority end up regretting it.

Maduro said last week that no more than 600,000 Venezuelans have left the country in the past two years.

But Sevilla said more than 600,00 Venezuelans have applied for residency cards in Peru and Colombia alone. “It’s a free and voluntary process,” he said. “These aren’t made-up figures. They’re people who exist with first and last names.”