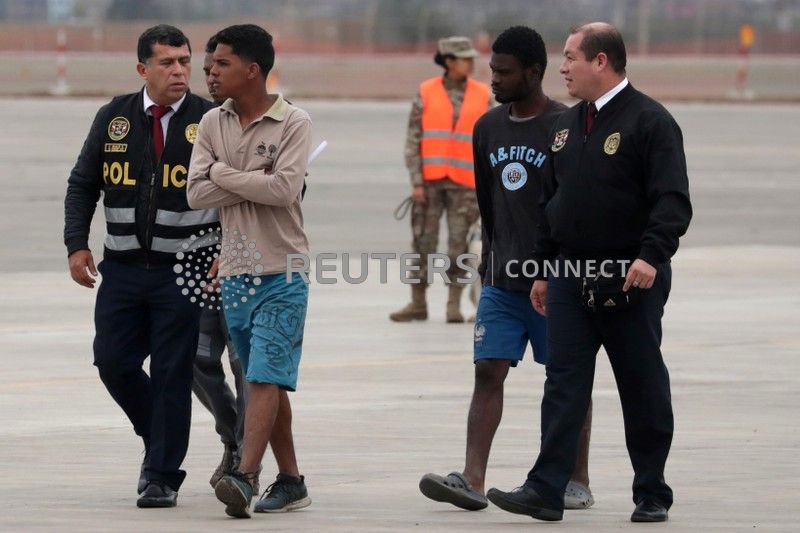 Peruvian immigration police escort Venezuelan migrants prior to their deportation, after being accused of concealing that they had criminal records, according to Peru's Interior Ministry, in Lima, Peru June 6, 2019. REUTERS/Guadalupe Pardo

LIMA (Reuters) – Peru’s president on Thursday vowed to continue deporting Venezuelans with criminal records as long as necessary, part of a tougher stance towards Venezuelan migrants in the region as they continue to flee their crisis-stricken homeland in mass.

The government of centrist President Martin Vizcarra started deporting groups of Venezuelans with criminal records in April, when a local opinion poll showed an increasingly negative perception of the migrants, mainly due to fears about crime.

Speaking to journalists while a third group of about 50 Venezuelans were escorted onto a plane, Vizcarra said the expulsions were only the beginning.

Peru was once one of the most welcoming countries for Venezuelan migrants. It granted hundreds of thousands of temporary residency permits to Venezuelans that let them work legally and access health and education services.

But last year, after more than half a million desperate Venezuelans fled to Peru, the government tightened entry requirements for the migrants and ended the residency programme earlier than planned.

Peru’s Foreign Ministry said on Thursday that starting June 15, Venezuelan migrants will be required to obtain a humanitarian visa from Peruvian consulates in Venezuela – and in special cases from consulates in Colombia or Ecuador.

The ministry did not say it would change its policy towards Venezuelans seeking refugee status, who are not generally required to present visas or passports. Peru has said the vast majority of Venezuelans who apply for exile do not qualify.

Some 3 million Venezuelans have left their homeland since 2015, seeking to escape an economic crisis that has deprived many of basic foods and medicine, according to a U.N. estimate. A further 2 million are expected to emigrate this year.

Most Venezuelan migrants have ended up in other South American countries, straining public services in developing nations unaccustomed to absorbing large migratory waves and fuelling a backlash in some places.

Vizcarra said his government would continue to push hard for a transition to democracy in Venezuela, which he described as the only way to solve the migratory crisis.