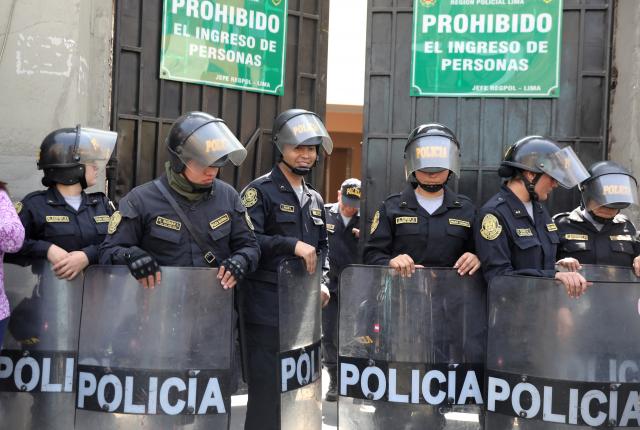 Policemen guard the prefecture where Keiko Fujimori, daughter of former President Alberto Fujimori and leader of the opposition in Peru, is detained, in Lima, Peru October 10, 2018. REUTERS/Mariana Bazo

LIMA (Reuters) – Keiko Fujimori, the daughter of former President Alberto Fujimori and leader of the opposition in Peru, was arrested on Wednesday as part of an investigation into accusations of money laundering linked to her 2011 presidential campaign.

Fujimori was detained when she arrived at the state prosecutor’s office to testify in the case, which was brought under Peru’s Organized Crime Law, according to an official document seen by Reuters.

Building conglomerate Odebrecht [ODBES.UL] has been at the center of Latin America’s biggest graft scandal since acknowledging in a late 2016 leniency deal that it had bribed officials in a dozen countries, including Peru.

Fujimori will be detained for 10 days, along with 19 other people, including two former ministers from her father’s government, according to her lawyer, Giuliana Loza.

Loza told local radio station RPP that the decision to arrest Fujimori had been “abusive and arbitrary.”

“There is not a jot of evidence against her,” she said.

Popular Force has a majority in Congress and was key to helping topple former President Pedro Pablo Kuczynski in a graft scandal in March.

Last week, a pardon granted to Alberto Fujimori by Kuczynski was annulled.

Following his extradition to Peru in 2007, Alberto Fujimori was sentenced to 25 years in prison for commanding death squads that massacred civilians in a counterinsurgency campaign during his rightwing government. He was later found guilty of corruption.

A twice-defeated presidential candidate, Keiko Fujimori has led her father’s rightwing movement since he was imprisoned in 2007.