Person of interest charged, in court 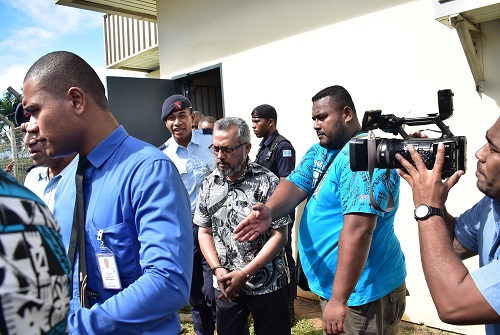 THE person of interest in the Nausori Highlands deaths was charged with five counts of murder and one count of attempted murder yesterday.

Muhammad Raheesh Isoof appeared before magistrate Nirusha Kannangara in the Nadi Magistrates Court charged with the murder of Nirmal Kumar, 63, his wife Usha Devi, 54, their daughter Nileshni Kajal, 34 and her two daughters Sanah Singh and Samarah Singh, aged eight and 11.

He was charged with the attempted murder of one-year-old Samaira Kumar by abandoning her in the Nausori Highlands.

As the court clerk read out the charges, Mr Isoof said he understood them.

He said if Mr Isoof was granted bail, it was unlikely that he would surrender to custody and appear in court to answer charges.

Inspector Chand also said the accused had tried to flee the country immediately after the bodies were discovered and the fact that he held permanent residency status in New Zealand was also an issue.

Inspector Chand added that the prosecution had a very strong case and it was in the interest of the protection of the community that Mr Isoof not be granted bail.

The prosecutor said another reason he should not be granted bail was because the accused was a neighbour of the victims and it was highly likely that he could interfere with witnesses.

Inspector Chand said the prosecution’s objection to bail also stemmed from the fact that the accused had breached the Kumar family’s trust and that there was a certain degree of planning on the part of Mr Isoof in relation to the deaths.

He asked for the accused to be remanded in custody until September 25 when the matter would be heard in the High Court in Lautoka.

Defence lawyer Iqbal Khan said all the objections of the prosecution could be cured by imposing strict bail conditions on his client.

Mr Khan said a stop departure order was already in place and Mr Isoof’s passport was already with the police.

Mr Khan said the prosecution only had “circumstantial evidence” which was based on the caution interview that police had conducted with his client.

He said the court needed to consider the fact that Mr Isoof had denied any knowledge of the Kumars deaths and more importantly that he had gone to the police and informed them that he had taken the Kumar family to the Nausori Highlands and dropped them there.

Magistrate Kannangara said the charges against Mr Isoof were serious and there was the likelihood of him interfering with witnesses because he was their next door neighbour.

She denied bail, ordered Mr Isoof to be remanded in custody and moved the matter to the High Court in Lautoka for September 25.