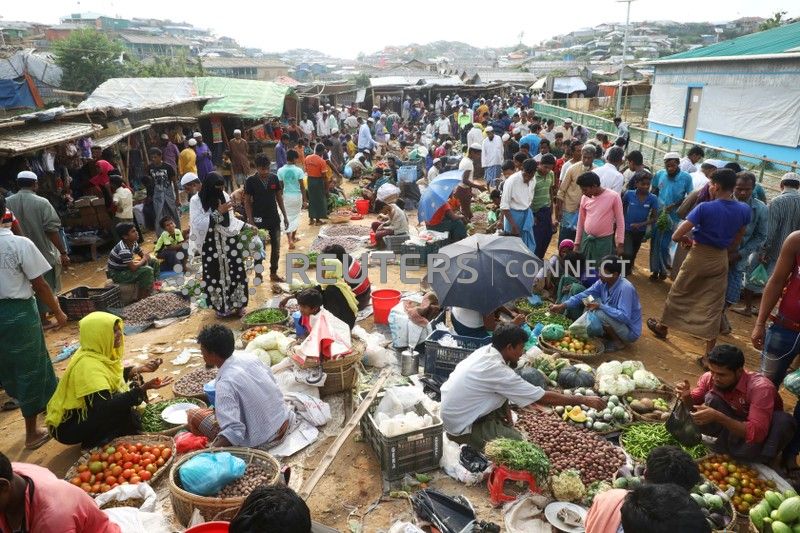 COX’S BAZAR, Bangladesh (Reuters) – An attempt to begin repatriating thousands of Rohingya Muslims living in camps in Bangladesh stalled on Thursday after nearly 300 refugee families refused to go back to Myanmar, almost a year after a similar effort failed amid protests.

Last week, the neighbours said they had agreed Aug. 22 as the start date for the return of 3,450 people cleared by Myanmar, of more than 730,000 who fled a military crackdown in Rakhine state in 2017, and now shelter in the sprawling camps.

The United Nations says the crackdown in Myanmar’s western region was carried out with “genocidal intent”. Although Myanmar authorities say they are ready to receive any who return, refugees have refused to go back for fear of further violence.

“I was so sad, so worried about going back to Myanmar,” said 32-year-old Sayedul Haque, who discovered his name on the list for repatriation but refused to go. “I felt afraid of the Myanmar government, as though I was back there.”

Since the plan was announced, United Nations staff and Bangladesh officials have been interviewing those cleared for return, selected from more than 22,000 names sent by Bangladesh to Myanmar, to determine if they want to go.

None of the 295 families consulted until now have agreed to go back, said a Bangladesh relief official, Mohammad Abul Kalam, although buses and trucks have been arranged to carry them across the border.

“This is a continuous process,” Kalam, who is Bangladesh’s refugee relief and repatriation commissioner, told Reuters by telephone.

“We are interviewing other families who were cleared by the Myanmar government and if anyone expresses willingness to go back we’ll return them. All structural arrangements and logistical facilities are put in place.”

In a statement on Thursday, the UN refugee agency, which also said nobody had agreed to go back, said its staff would continue to assist interviewing the rest of those cleared for return.

Min Thein, the director of Myanmar’s social welfare ministry, told Reuters that officials had been sent to greet any arrivals at reception centres on the border on Thursday morning.

The U.N. and Western countries have said the August 2017 military crackdown included mass killings and gang-rapes.

Myanmar has previously rejected the U.N.’s categorisation of the violence in Rakhine as “one-sided”. It says that military action that followed militant attacks on security forces was a legitimate counter-insurgency operation.

Previous attempts to persuade Rohingya to return to Rakhine have also failed due to opposition from the refugees. An effort in November sowed fear and confusion in the camps, and finally failed after refugee protests.

On Thursday morning, refugees in Camp 26, home to many of those cleared to return, said neighbours who found they were on the list refused to go for interviews at the office of the government official in charge.

Some left the camp for fear they would be forced to return to Myanmar, they said.

“They fled from their homes by locking their doors,” said Fayez Ullah, 25.

“People were hiding,” said one of the camp refugee leaders, known as mahjis, who asked not to be named for fear of retribution.

Many refugees say they want to return home, but under specific conditions, including guarantees of citizenship and security and improvements in the lives of Rohingya still in Myanmar.

Tens of thousands of Rohingya remain in Rakhine state, confined to camps and villages, mostly denied citizenship and subject to tight restrictions on movement.

Although many Rohingya can trace their ancestry in Myanmar back centuries, they are widely denigrated in the country as illegal immigrants from Bangladesh.

Knut Ostby, the head of the UN in Myanmar, told Reuters in an interview on Thursday Rakhine state was not ready for any significant returns.

“There could be safety, there could be a proper life… for people who come back,” he said. “But the situation is not there yet.”

He said the focus should be on trying to restore “dignified and full, proper lives” to Rohingya still in Myanmar.