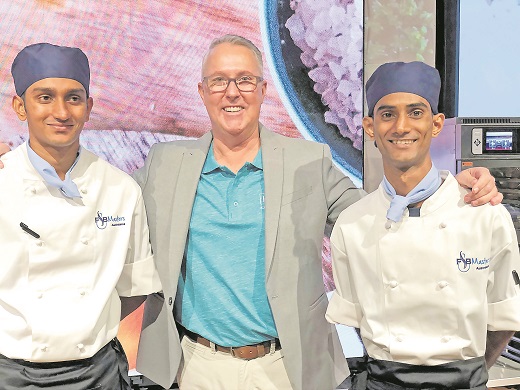 David Wells with two young and upcoming chefs, who were selected to travel to Australia and compete in the Hilton Food and Beverage Masters competition at Hilton Brisbane in January this year. Picture: SUPPLIED

There is a plethora of expatriates working in the country. They bring with them different skill sets in an effort to boost productivity and contribute significantly in meeting the business objectives to operate profitably. They are mostly employed in multinational enterprises, although some are employed in the public sector and non-government organisations.

David Wells is the area general manager of Fiji at Hilton Fiji Beach Resort and Spa including Double Tree Resort by Hilton Fiji, which is located at Sonaisali Island.

“I was born and grew up in Melbourne, Australia. I attended secondary school until mid-way through Year 1, when I decided that school and further formal education was not what I wanted.

“All I knew at that point was that I wanted to get a job and start carving out a career for myself. I thought that on-the-job experience and hard work would get me on the way. Apart from that, I did not really have a plan.

“The following week, I started work for a clothing manufacturer who had over 50 retail stores around Australia. My very first job was as a dry cleaning counter staff. I took in customers dirty clothes, labelled and bagged them up to go out for cleaning.

“That job did not impress me that much, but it made me determined to be the best dry cleaning counter staff I could be by offering immaculate customer service.

“My plan was that I might be noticed by the manager and get promoted to a more challenging position in the store. With a bit of luck and some hard work, my plan came to fruition when I advanced to sell menswear after three months.

“That was my first work life lesson; linking great customer service with a strong work ethic and a positive attitude with the sole purpose of exploring new career opportunities,” he recalled.

Mr Wells continued in his role for nine years before deciding to switch allegiance, taking on a much more challenging and daunting task.

“Over the next nine years, I continued to work for this large organisation within many of their stores across Melbourne.

“I continued to get small promotions and by the time I left the company, I was responsible for visual merchandising and training salespeople about the basics of sales strategies, specifically targeting an exclusive high-end menswear label throughout the state of Victoria.

“I joined my father’s small building company constructing houses. I went straight from selling clothes to supervising building sites and contractors without an iota of any experience or building knowledge.

“Talk about a challenge and induction of fire! I was way over my head and had to learn fast to stay on top of the many challenges I was facing.

“I realised that I needed to self-educate myself if I was going to survive hence I bought books about how to build a house.

“It is funny when I reflect on the extremes that I had to adopt, however, it was for a good cause because those books literally taught me so much that I could apply back on the building sites.

“It was not long before I found it easy to circumvent to the new role. I was talking the building language and had a solid understanding of my role and how to manage the contractors,” he quipped.

It was by chance that Mr Wells endowed his passion in the tourism industry.

“After two years, I took a holiday to a small town in North Queensland called Port Douglas. I instantly fell in love with the warm tropical seaside lifestyle in a holiday town and made an instant decision to move there.

“So I went back to Melbourne, resigned from my father’s company, packed up everything I owned and moved to sunny, Port Douglas.

“That was it; I arrived in paradise and was going to live happily ever after. Except I only had a little money, no job and nowhere to live.

“I found a small flat I could afford; saw a small shop for available rent at $37 per week. I decided to re-enter the retail sector.

“So I rented the shop on the spot, albeit without any business plan at all! Not the smartest way to start a business, I reckon, however the urge to succeed made me innovative.

“I looked around town and identified an opportunity to hire out scooters to the tourists.

“With every cent I had left, I managed to buy seven Honda 49cc petrol scooters and started hiring them out to the tourists.

“That worked well and before long I had bought 100 bicycles and was renting those out to the tourists as well.

“Business was good and I was enjoying my new tropical lifestyle! After some time I had enough deposit for a small house and bought my first home.

“The business continued to do very well and I personally worked seven days a week for three straight years to get ahead in life, determined to be successful. Another rental operator in town made a good offer to buy my business and I was ready to sell the business.

“The deal was done and I was once again unemployed and wondering what to do next. So I thought that since the whole town was tourism based, I might as well get a job in one of the many resorts. I could not have been more wrong.

“I applied for jobs all over town and everywhere I went, I got the same response of ‘you don’t have any experience in resorts, we need people with experience’.

“I argued that I would bring many life and people skills but still got negative replies.

“During one interview that was going in the same direction, I jumped up and said, ‘I don’t have any experience so I will work for you for nothing so that I can get some experience, and then will proceed to find a job in a resort’.

“The general manager calmly smiled at me and said ‘you start tonight’. And that was the entry point and my first employment in the hospitality sector.

“I worked in the kitchen washing dishes, got promoted to the bar and restaurant floor, and later on, I was moved to the front office reception area of the resort.

“I loved working in the hotel and tourism industry and became passionate about making a new career for myself as a hotelier. By chance, the human resources administrator of the resort fell ill and I was seconded to temporarily fill that role in HR.

“That was the beginning of a long career I had in human resources across several resorts and hotels. Within four years, I was the human resources manager for a 782 room resort in Port Douglas.

“I had learned about HR on the job and from my fantastic HR manager whom I replaced.

“Then in 2001, I joined Hilton Cairns as director of human resources.

“I fell in love with the Hilton culture and made the decision that Hilton was going to be my next long-term career path.

“After four years running HR, I was moved to become the director of business development, again a role for which I had nil experience.

“My general manager put significant faith in me to learn on the job and drive all the revenues for the hotel. It was a risk, but it paid off.

“It was six months before I felt competent in the role and I continued to learn as I led the business development team over the next seven years.

“In 2013 I was offered the role of a cluster director of human resources for four hotels that Hilton was taking over in Northern Territory, Australia. I jumped at the opportunity to go back into HR with multi-property responsibilities.

“I was able to consolidate all the skills I had garnered over many years in hospitality and business to become a strategic senior HR leader within a complex business and ownership structure.”

Mr Wells has been in Fiji for the last three years and is awed at the Fijian people’s warmth and friendliness.

“In 2017, I was offered a great opportunity to move to Fiji as cluster general manager leading the Hilton and Double Tree teams, who manage the resorts on behalf of the Vision Group.

“In September 2019, my title was changed to area general manager – Fiji, which includes the responsibility for any future Hilton properties in the country.

“The Fijian people and Bula spirit is what makes Fiji so unique as a tourist destination.

“I have never experienced anything close to the genuine warmth and kindness of the Fijian people, which is the reason so many tourists return year after year.

“And I am very confident that they will be back when the pandemic is under control and borders with Australia and New Zealand reopen. I am so proud to call Fiji my home and humbled to lead such a wonderful team at Hilton Fiji Beach Resort & Spa and Double tree Resort at Sonaisali Island, who continues to ‘fill the earth with the light and warmth of hospitality’.”