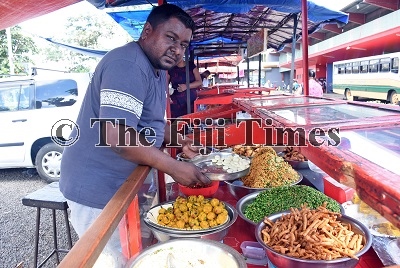 The zeal to succeed in his handmade sweet selling business prompted Ranesh Kumar to chart his own course in life single-handed.

Mr Kumar, 34, is from Lovu in Lautoka. Being the eldest in a small family, the urge to look after his sickly parents and younger sister has continually made him aspire for success.

“My father, who is 58 years old, is a stroke patient while mum is 55 years and suffering from asthma,” he said.

Mr Kumar is educated up to Year 12 at Tilak High School.

“My dad was a farm labourer and I come from a poor family background.

“Despite the family struggles, I managed to get educated up to Year 12. I wanted to continue with my education but poverty got the better of me.

“I could not further my studies since I wanted to become an accountant,” he revealed.

With a close family member involved in the sweet selling business, it became an easy transition for Mr Kumar to become a sole proprietor.

“My paternal uncle, who was staying at Vaivai in Lautoka, was selling this sweets cart. I persuaded my father and he bought it.

“My uncle had bought a taxi and he wanted to concentrate on his taxi business. My father bought the sweets cart for $5000 — an agreement was made with my uncle on the payment arrangements since he did not have that much savings.

“My father made a half cash deposit while the arrears were paid in installments.

“The sweets cart was bought in 2005. As a bonus, I was fortunate enough to be offered some other sweet selling utensils, like a big pot and some basins.

“I saved so much money with that great deal offered by my uncle.”

Mr Kumar started to reap the rewards of his hard work and vision until he lost his home and all his belongings.

“In 2012, my three bedroom corrugated iron and timber house was burnt to the ground.

“The fire started from the kitchen where my mother used to make the sweets. It was a struggle because my father had suffered a stroke two years earlier.

“Luckily they had gotten out of the house during the inferno otherwise it could have been a tragic incident.

“My parents were at home and the fire was noticed by the neighbours who pulled my sickly parents to safety.

“Just the clothes we had on our body. It was like starting all over again in life.

“The government gave $1000 and the rest was derived from money I had managed to save. The neighbours and family members were assisting us. I had to close my business for about a couple of months.

“I had to buy all second-hand equipment. It cost me $3000 to install all the sweet making equipment and purchasing the appropriate utensils.

“I needed big basins for storing the different sweets. I bought some new stuff and the rest were purchased from sweet sellers. But I never lost hope.”

Mr Kumar does not hire anyone to make the sweets.

“I prepare all the sweets myself at home. Before my parents got sick, they were making the sweets.

“The great part about this business is that sweets not only appeal to the small kids, but to adults also so it is a profitable business.

“And the cost factor is equally important because it is cheap and affordable.

“I am still building my house, slowly, little by little, day by day. I intend to buy another sweet cart and increase my business. However, the priority at present is completing my house.

“I also have to think about getting married. For the past 15 years, I have been selling sweets from the same place.

“This is the only work I have been engaged in and I have never worked for anyone else. I am my own boss.”

The visibility and ideal location of Mr Kumar’s sweet cart is reason enough for a good clientele base, which he enjoys.

“Business was normal before COVID-19, however, after the novel coronavirus outbreak, Mr Kumar conceded that he had lost many bona fide customers.

“I do not compromise on the quality of the sweets I make. I want my customers to get their money’s worth, so that they always prefer Mr Kumar’s Fijian Sweets as their number one sweets cart for scrumptious snacks.

“Although, I have lost about half of my customers which has led to a drop in sales, I have no complains. At least I still operate my sweet selling cart,” he proudly said.