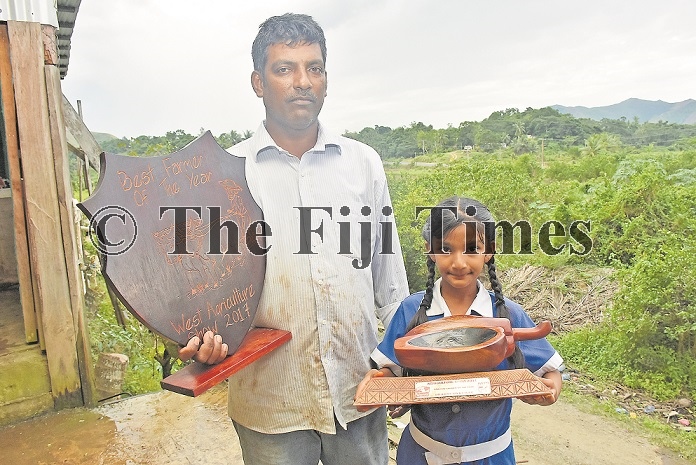 Vegetable farmer and exporter Dharmend Kumar and his youngest daughter Dakshita Kumar with his awards at his home in Valley Rd, Sigatoka. Picture: REINAL CHAND

As a young boy, he worked as a labourer on many farms after his dad passed away. He was tasked to look out for birds and wild animal’s that damage the crops.

“I had to shoulder the responsibility of looking after my mother and two sisters and I started working on farms to support my family in anyway possible.”

The Sigatoka-based farmer who is now as exporter broadened his knowledge on farming when he started to work on commercial farms over the years.

“I started working for farmers who were engaged in commercial farming and learnt all the nuances of farming, rather I would say I did a practical course of agronomy on the farm,” he said

Mr Kumar, at the age of 18, left farming and worked at a block factory for 11 years and while working there, he got married and had three children.

The love for farming lured him back to the land and his decision was supported by his mother and wife.

He opted to rent a piece of land for six years as he did not have land of his own.

“I did not have a single piece of land of my own. Now I have bought all the land that I have over the years.

“My wife was new to farming, but she helped me a lot and my mom was always there by my side.

“I had rented a piece of land from a person and from then on I never looked back.”

Over the years, he managed to buy sufficient land to farm vegetables for export.

He said he advised his children to help him develop his business as there was greater returns from it compared with white collar job.

“I have around 19 acres of land now and my children help me in my export business as well after making them realise the worth of farming.”

Mr Kumar has received accolades for his farming achievements over the years.

“I had dreamt of becoming a exporter one day.

Mr Kumar enjoys swimming, riding horses and drinking beer with his friend’s during his free time.