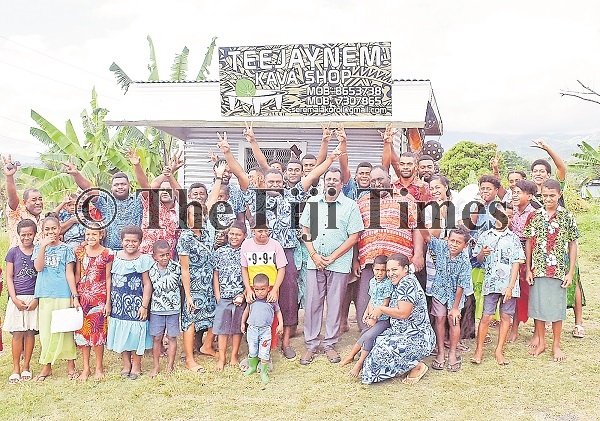 In a bid to assist his wife, who was the sole breadwinner in the family, Seremaia Koroi set up a kava business two years ago.

Apart from their immediate family, there were many other mouths to feed in their modest Tavakubu, Lautoka, home.

“To assist his wife and be independent, Mr Koroi came up with his own idea of selling kava from his home,” Mr Nemani said.

“This has really helped his family with their everyday living needs and wants, including the education of his younger brother and his children.

“Unfortunately, his father has passed away, so he has become the man of the house and through his kava business, he supports his whole family and their obligations.

“He is thankful for the support from the village elders to let him operate his canteen on the village roadside after selling from his home.”

After setting up a kava canteen, Mr Koroi undertook a New Business Creation Course last year that was conducted by the Ministry of Youth and Sports Development Lautoka Office and this enabled him to grasp the basic concepts of running a business.

He started his small business by selling pounded kava sold in $5 bags.

Mr Koroi expanded into $20 and one kilogram packs, as and when required by his customers.

The young entrepreneur said that the week-long business training course had greatly assisted him in establishing a business plan and also taught him the importance of discipline in the operation of a business.

“It was an eye-opening experience for me and gave me the confidence to work on my kava canteen,” said Mr Koroi.

“I am very appreciative of the training opportunity from the Ministry of Youth and Sports Development.”

He said he had plans to expand the business in the future to enable him to generate more profit by having other outlets for selling kava.

“I want to have a stall in the market and maybe someday export kava.

“My business was rolling well before COVID-19 but lately it has dwindled a bit because so many people have lost their jobs.

“But I am optimistic about the future. I also employ my younger brother and a cousin on a part-time basis to help look after the shop when I have other commitments.

“My application for a youth grant scheme has been successful and I am planning to increase kava stock.

“I will immediately open a stall at the market and employ a couple of youths to look after it.”

Mr Koroi has also obtained a retail licence to sell some food items to support his flourishing kava business.

“I use solar lights as the mode of electricity to save money.

“I want to be an inspiration to youths in my community and my advice to young people is that if they have something planned to start up a business, they should focus on that plan, start it up and be patient.

“Although it will be a bit difficult in the beginning, it will be rewarding in the long run.

“I would also advice youths to always look for advice and assistance to improve the running of your small business.”

Mr Koroi’s business, Teejaynem Kava Shop, received a grant of $4980 and this consisted of yaqona stock and some canteen stuff like canned fish, milk and biscuits.