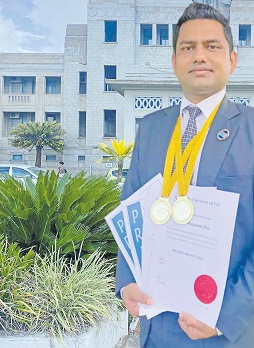 Joseph Rao with this gold medals and his Bachelors of Laws and Diploma in Legal Practice. Picture: SUPPLIED

From a humble farming background, Joseph Rao has gone beyond what any young man raised in a humble setting has done – a recipient of two gold medals. The recipient’s two gold medals from the University of Fiji’s School of Law wasn’t always as easy as many would think.

He is the gold medal recipient for the outstanding student of law and outstanding graduate in the school of law awards from the university after completing his Bachelors of Law Degree and Diploma in Legal Practice.

He also holds the record for the highest mark at the University of Fiji’s School of Law with a GPA of 4.35.

“I am honoured to have received such prestigious awards,” he said.

“This was only possible through my prayers and faith in God, hard work, love and support of family and friends and, of course, the support of my lecturers at the university.”

Labelled as someone who was naturally not bright, but a hard worker in his school report, Mr Rao brushed aside the labels and pushed through to become a successful young man.

Mr Rao, who didn’t do well with his studies in primary and secondary schools, still smiled through the trials as he had hope in a higher power — God.

“For me personally, as a Christian, I keep God close to my heart. I believe that with God, there is no limit to what we can do.

“There are no obstacles you can’t overcome because with God all things are possible.”

Brought up in a farming background, Mr Rao recalls dreading the weekends and the school holidays because it meant he would have to get up early to do his chores, regardless of the weather.

He commended his parents for their foresight and wisdom on education, opening doors of opportunities for their children.

“My parents had worked so hard to put my sister and me through school — a privilege that they themselves didn’t have.

“My sister and I went to school in Taveuni and we used to walk to and from school. We studied with kerosene lanterns and never had pocket money and stayed with kind relatives in order to attend secondary school.

“As a child, I thought our life was tough, but I realised that growing up there were other students who went through similar or worse situations than we did.

“I realised that all the hardships were blessings in disguise.

“It taught me to value things I have in life and to be grateful and to work hard in achieving goals.”

Due to financial constraints caused by Cyclone Ami in 2003, Mr Rao left secondary school for three years as their family farm was completely destroyed.

In order to continue with school, Mr Rao earned money by planting dalo and selling it.

He later was able to enrol himself in the School of Hospitality and Tourism Studies pursuing a Diploma in Hotel Management where he obtained a diploma.

After working in the tourism industry, Mr Rao went on to pursue an education in law, but before that eventuated he opened a cafeteria at the University of Fiji’s Samabula Campus in Suva with the help of his hospitality background.

“I love new challenges and constantly look for meaning in life,” he said.

“I knew that joining the law school would give me a new challenge and a new purpose in life. I realised that becoming a lawyer would allow me to meaningfully contribute towards the needs of our society and I also knew that it was going to be tough. The university staff provided me with muchneeded encouragement to excel in academia.

“I used to observe lecturers and students from behind the counter of the cafeteria. The students used to sit around the cafeteria arguing amongst each other on a particular point of law, and it was exciting to hear about.

“I wanted to know more about what they were discussing and most of them carried themselves with confidence too, which pushed me further to want to study law.”

He said he spoke to some lecturers and students about his prospects of becoming a lawyer and they encouraged him to become one.

“I believe your true worth is not measured by your talent, intelligence or inherited privileges for things you are born with can be wasted, but how well you do against the face of adversities is what sets you apart.

“Even if all odds are against you, with God’s favour, hard work, being humble and a teachable attitude, you can go far. Strive for excellence, ask a lot of questions and question the answers given.”

He played Mark Anthony’s role in Julius Caesar’s play as part of the school of law’s Thespian Society.

He participated in Bema Open Forum sessions too – a platform that invited speakers such as lawyers, politicians, academics and the like to talk to students on topics of interest.

He went to Christchurch, New Zealand to represent the university in a moot competition