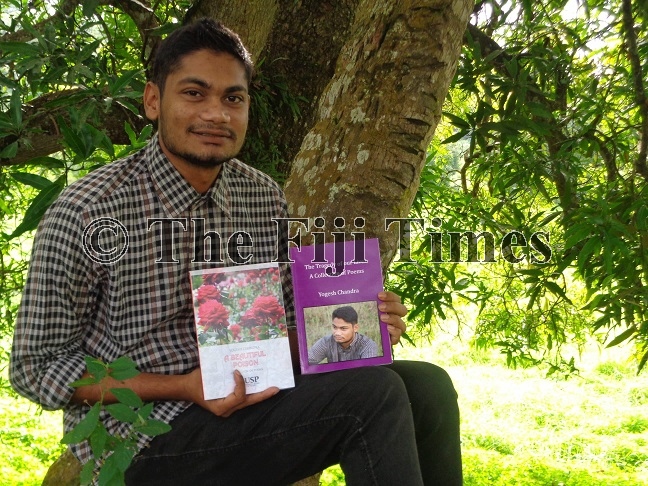 Yogesh Chandra with his published books of poems The Tragedy of our Lives and A Beautiful Poison published by the USP Press. Picture: SUPPLIED.

One of his poetry about ‘grief and melancholia’ was used by a journal publication in Singapore where artists and poetry writers are recognised.

Chandra’s writing stanzas play a sense of connectedness with his surroundings from his early age.

At only 12 years of age, the renowned poet chose to pursue writing poetry as way of expressing himself.

The 26-year-old, who is originally from Nasekula Village in Labasa, grew up in an environment he describes as poverty driven.

“Poetry was the only thing that sung to me when no one would. I knew, with the varying emotions governing us at each step, some things just needed to be expressed. And there is no escape as life is the greatest poetry ever written”

“It was the only way I could pour my heart out. And the joy after a piece had been written out boldly was indescribable”

“Poverty was also a factor but the aftermath of that period made me realise who I was, and the importance of embracing the beauty in struggles and creating something out of it”

Chandra graduated from University of the South Pacific with Bachelor of Arts in 2017.

Even in university, his passion and determination for poetry was strong.

“This eventually continued during my studies at the University of the South Pacific. It was here that I also got exposure to the art of writing. I still remember sitting inside the IT labs the whole day, doing nothing but writing. I just had to and nothing could even equate to that feeling”

In 2017 Chandra published his first book, The Tragedy of our Lives that contained 200 of his poems followed by another book called A Beautiful Poison in 2018.

The poems in both the books were based on real life.

“I started working on my first book The Tragedy of our Lives which was eventually published in 2017 and distributed at the local stores as well as on Amazon stores worldwide. Then in 2018, I published my second book titled A Beautiful Poison published by the USP Press.

“I have been writing a lot all this while and am hoping to publish my third book as well. I want to explore more of everything around me and poetry is perhaps the only thing that will lead me to it. I really want to continue writing each day.”

One of his pieces Pristine Thoughts was featured in the CarpeArte publication journal based in Singapore which was based on ‘grief’ and ‘melancholia’.

He said the opportunity was an honorable experience and an encouragement to continue writing.

“Well I had started interacting with foreign authors online who in turn provided me with an honest critique of my work. I had also submitted my piece which was accepted and published.

“Communicating with writers around the globe gave me a newer perspective into my pieces and areas where I could perhaps improve on.

The young poet hopes to inspire writers to pursue their dreams.

“We have emerging writers and I believe that their work could be given more exposure too. More people are expressing their minds through poetry which is really a good thing.

“It gets tough at first, but the joy that echoes afterward is incomprehensible. I know that some may be finding it most challenging to keep up some days that they want to give up on writing, but there is just so much to explore and create.

“Just don’t give up as yet, even if you are consistently writing, but there are no readers of your work. Seasons change and so will the tide to harmony”.