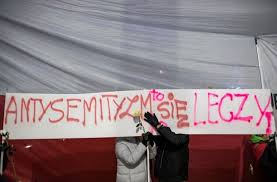 FILE PHOTO: Protesters hold banner reading "Anti-semitism is treatable" during a counter-demonstration against a far-right rally in support of the Holocaust bill in front of the Presidential Palace in Warsaw, Poland February 5, 2018. Agencja Gazeta/Dawid Zuchowicz via REUTERS

WARSAW (Reuters) – Poland’s religious and political leaders should unequivocally condemn antisemitic behavior following a number of troubling events in the country, the head of the World Jewish Congress wrote on Wednesday. Ronald S. Lauder criticized “the sight of protesters on the streets of Warsaw chanting anti-Jewish and anti-American slogans”, and the burning of an […]