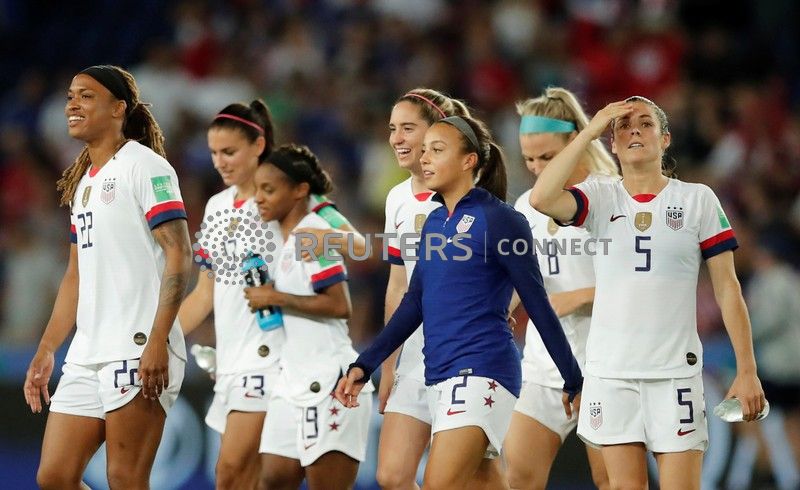 (Reuters) – With the United States preparing to play in the women’s World Cup final the team’s fight for pay equity resurfaced on Wednesday with the Democratic Women’s Caucus demanding answers from U.S. Soccer chief Carlos Cordeiro.

The U.S. national team’s dispute with the U.S. Soccer Federation over pay parity has simmered in the background of the month-long tournament which will reach a climax on Sunday in Lyon when the U.S., coming off a tense 2-1 semi-final win over England, will face the Netherlands or Sweden.

Players have said repeatedly their lawsuit against U.S. Soccer has not been a distraction but the dispute was front-and-centre again as the Democratic Women’s Caucus sent Cordeiro a letter expressing its “deep concern regarding inequities in pay, publicity and investment in the U.S. Women’s National Team (USWNT)”.

The letter added; “Members are also demanding answers from the Federation as to how it will remedy these injustices”.

All 28 members of the defending World Cup champions’ squad were named as plaintiffs in a lawsuit against U.S. Soccer filed in March.

The players say they have been consistently paid less money than their male counterparts even though their performance has been superior to the men’s team.

The lawsuit also outlines years of institutionalised gender discrimination, claiming travel conditions, medical personnel, promotion of games and training are less favourable for female players than for their male counterparts.

A Wall Street Journal report last month said that U.S. Soccer had agreed to participate in mediation following the conclusion of the tournament.

In their letter, the Members requested information about the U.S. Soccer Federation’s plans to address institutionalised gender discrimination within the Federation and justifications for differences in compensation, marketing, and promotion which have implications for its compliance with the Amateur Sports Act of 1978.

The Democratic Women’s Caucus, a Political Action Committee, also pointed out that the U.S. women’s team generated more revenue for the federation from 2016-18, bringing in $50.8 million compared to $49.9 million by the men’s squad.

“The inequities that these women champions have faced as members of the USWNT are indefensible,” the Members wrote. “The U.S. Soccer Federation should work to correct course and close the wage gap so that the only thing women athletes are fighting for is the world title or a gold medal.

“Instead, the message sent to women and girls is that their skills and accomplishments are of lesser value.”